Merged with Dakal and Sele on Day 19

Yara is a tribe from Survivor: Winners at War.

Yara was formed after the tribe switch, and it had a majority of three Sele members over the two remaining Dakal. However, due to previous events, the majority was very dysfunctional, and the tribe was overwhelmed with low morale and paranoia, until a major elimination allowed them to relax. Their tribe color is green.

On Day 12, both tribes returned to the marooning location where a Tribe Expansion took place. The new green tribe, called Yara, consisted of former Sele members Adam Klein, Ben Driebergen, and Rob Mariano, and former Dakal members Sarah Lacina and Sophie Clarke. On paper, this would spell trouble for the two Dakal women, but the three Sele men were not in the best of relations after certain events occurred days ago. Despite that, the three men reluctantly agreed to stick together to eliminate Sarah and Sophie. Knowing that there was a Hidden Immunity Idol hidden at camp, the tribe scattered to find it, only for Sophie to claim it for herself. Seeing that it was the same idol Kim found on Dakal, Sophie shared her half with Sarah.

In their first Immunity Challenge, Yara had the lead, but they struggled on the puzzle portion, allowing Sele and Dakal to overtake them. After losing the challenge, Sophie feared she could be going home as she was on the puzzle with Adam. Rob decided to pull a page from his time on Redemption Island and bring back the "Buddy System." However, this only caused boredom and aggravation from everybody else, with Ben and Adam beginning to realize how much control Rob had over the tribe. Come Tribal Council, Ben and Adam sided with the Dakal women and voted Rob out 4-1. Rob bequeathed his two Fire Tokens to Parvati Shallow before leaving for the Edge of Extinction.

With Rob gone, morale on Yara skyrocketed as the foursome was now free and relaxed. Ben made bonds with Sarah and Sophie, but this alienated Adam from the core group. On Day 16, it was revealed that the Immunity Challenge was a winner-takes-all, with the two losing tribes going to a Double Tribal Council. Yara kept their pace and managed to win immunity along with peanut butter and jelly sandwiches with milk.

A few days later, Adam and Ben tried looking for the idol to no avail, unaware that Sophie had already claimed it. However, Adam was convinced that Sarah had it, and his paranoia caused him to be alienated even further. Despite that, it did not affect Yara's teamwork in the next Immunity Challenge as their slow and steady approach gave them the lead and they won immunity again. On Day 19, the three tribes merged. 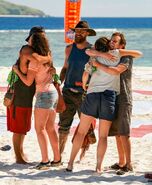 Yara after the Tribe Expansion.

Yara at the merge.