The host begins the challenge by telling the castaways a story about local folklore. When the story is ended, the castaways run to stations where they will be asked a question about the story they just heard. Answering the question correctly would allow the contestant to collect an item, while giving an incorrect answer would force the castaway to complete a task (typically discarding a pointless item) before they are able to return to the station and answer the question correctly. The first person to get back to the starting point with all their items would win.

In Survivor: Borneo, after the story about Bornean folklore, the castaways must run into the woods (where the masks with questions on them were scattered) with a video camera to record their answers. Kelly Wiglesworth won her third challenge in a row.

In Survivor: The Australian Outback, each player is shackled together at the wrists, ankles, and waist. After hearing a story about aboriginal settlers, they must run to eight stations. A correct answer will give them a key to unlock one of their shackles, which they must bring back to the center of the course. Keith Famie had the lead, but dropped one of his locks on his way back to the center. WIth Keith unable to find it, Colby Donaldson managed to get back with all of his locks and shackles. It gave Colby his third straight immunity win.

In Survivor: Africa, after Jeff Probst tells them an African story, the seven players race with staffs in hand to collect five colored leather straps by breaking ostrich eggs placed below the right answer to one of seven questions relating to the story. The first person to get five strips tied to their staff and return to the center of the circle would win. The race is close, with Frank Garrison and Lex van den Berghe being neck-and-neck most of the way. When Lex wraps his fifth strap to his staff, one of his other four straps slips off on his way to the starting circle. Lex quickly retraces his steps, finds his missing strap, brings it back to the starting circle and rewraps it around his staff. As a result, Lex wins individual immunity for the second straight time.

In Survivor: Marquesas, the castaways would listen to Jeff narrate an ancient Marquesan tale. Then, they would answer a series of questions about the story located within a private kiosk in which multiple-choice answers were made available. Correct answers would correspond to a basket that would reveal a mini idol. Castaways who guessed the correct answer would then attach the idol to a necklace with which they had been provided. The first person to answer five questions correctly and race across the finish line with five idols would win. Although Kathy Vavrick-O'Brien and Neleh Dennis each dropped one tiki on their way to the finish line, Kathy found the tiki she dropped and came out on top, winning individual immunity.

In Survivor: Vanuatu, after Jeff finishes the story about Roy Mata, the castaways must race to different stations to answer questions regarding the story. Each time a castaway answers correctly, they would receive a white pig tusk, which they must attach to a necklace. The first player to attach all five of their tusks wins immunity. Eliza Orlins won, giving her immunity.

In Survivor: Guatemala, the tribe members first heard a story about a Maya goddess, Ixchel. They then had to race to seven stations, each with a question about the story they heard. Each station had two options - one box contained a flag, one a stick. If they pulled a stick, they had to throw it into an urn and run back to the station to collect their flag. The first to seven flags won immunity. Rafe Judkins won immunity again in a close finish against Gary Hogeboom.

In Survivor: Cook Islands, before the challenge starts, host Jeff Probst will tell a story about the voyage of James Cook. Tied together as a group, the tribe must make their way over and under logs and through a field of poles, gathering seven answer flags. Once they cross a two-line rope bridge over a pit of water, they must use the seven answer flags collected to solve five questions about the story. If a tribe misses a part of the storyline, they may consult from their copy of the story; but they must go back through the course to reread it. The first team to finish wins reward; but the three top finishers win immunity. At Aitutaki, feeling like his tribe could do better, Ozzy Lusth forced his tribe to throw the next Immunity Challenge to get rid of Billy Garcia, who had not been putting in much effort at camp. To do this, J.P. Calderon (one of their strongest members) sat out and Ozzy made the tribe read the book to remember the story. At the challenge, Puka Puka and Rarotonga tied for first place, so they each received two large tarps as reward and immunity. Manihiki finished third and was also safe from Tribal Council.

In Survivor: Cambodia, the challenge was held for a reward at a local resort. After hearing a story about the origin of the Angkor Wat and Bayon temples, the castaways raced to five stations where they had to choose between three answers to the story's questions. Getting the question correct would allow the contestant to collect a gold talisman, while an incorrect answer would yield a wooden talisman, which would have to be tossed in a nearby fire before the contestant could return to the previous station. The first person to collect five gold talismans would win. It came down to a close race between Stephen Fishbach and Spencer Bledsoe. Stephen ended up winning and shared reward with Tasha Fox and Jeremy Collins. Additionally, one gold talisman was bundled with a clue to a Hidden Immunity Idol, which was found by Kelley Wentworth. 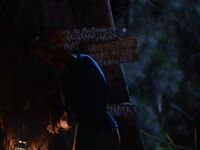 Colby competing in The Australian Outback. 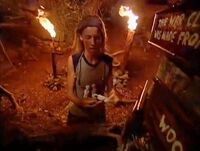 Neleh at the challenge in Marquesas. 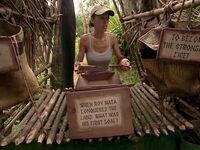 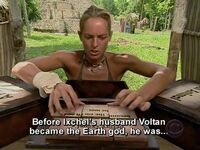 Cindy during the challenge in Guatemala. 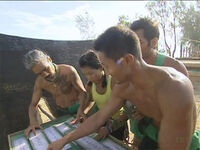 Abi-Maria competing in Cambodia.
Add a photo to this gallery

Retrieved from "https://survivor.fandom.com/wiki/Witch_Hunt?oldid=579978"
Community content is available under CC-BY-SA unless otherwise noted.