When It Rains, It Pours

When It Rains, It Pours

Africa
All-Stars
Micronesia
Heroes vs. Villains
One World
Millennials vs. Gen X
David vs. Goliath
Island of the Idols
Winners at War
When It Rains, It Pours (also known as Fools in the Rain, Raise the Roof, and When It Rains) is a recurring endurance challenge that originated in Survivor: Africa. Considered to be a classic Survivor challenge, it has had numerous incarnations throughout the series' run.

Castaways will have one arm above their head with their wrist tethered to a bucket of water on top of a platform. The castaway who could stand there the longest without tipping the bucket would win. At random points during the challenge, the host may tempt the contestants with food items. They would get the food item only if they step down.

Starting from Heroes vs. Villains, players would have to balance on a narrow perch while trying to maintain their balance at the same time. In Winners at War, castaways were not allowed to support their tethered arm with their free hand.

In David vs. Goliath, the challenge was reformatted to be a team challenge. The six members in each team must hold up eight sandbags, each weighing 10 pounds. Every 15 minutes, one member must drop out and their sandbag must be carried by another member. The first person to drop a sandbag loses for their team.

The challenge made its debut immediately after the merge in Africa. At various points, host Jeff Probst tempted the castaways with food if they stepped down. Ultimately, the challenge came down to Clarence Black and Teresa Cooper. Clarence attempted to make a deal with Teresa, though she refused his attempts at striking a deal. After over six hours, they agreed to a game of "rock, paper, scissors" to decide the winner. Clarence lost the game, and Teresa won individual immunity.

In All-Stars, the challenge came down to Rupert Boneham and Shii Ann Huang. When asked about secrets within the tribe, Shii Ann said that there were secrets, but not as to who the Chapera Alliance, who were openly rooting against her, was planning to vote out. After over two hours, Rupert dropped and Shii Ann won a vital immunity which was met with a vocal celebration.

In Micronesia, Jeff Probst again tempted the castaways with food. After over six hours, the challenge came down to Jason Siska and Parvati Shallow. Jeff brought out a large platter of food for the person who stepped down to share with the rest of the tribe. The tribe offered Jason, the clear outsider, that they would not vote him out that night if he stepped down. Jason demanded guarantees from each member of the tribe, who gave them, though no one actually intended to keep their word. Jason ultimately accepted the offer, giving Parvati immunity.

In Heroes vs. Villains, a narrow perch was added for the castaways to stand on to make the challenge more difficult. Throughout the challenge, Jeff Probst once again tempted the castaways with food. The challenge ultimately came down to Parvati Shallow and Rupert Boneham, and after an hour and ten minutes, Rupert lost his balance, handing Parvati immunity and her second victory in this challenge.

In One World, Jeff Probst once again tempted the castaways with food. After over 45 minutes, the challenge came down to Chelsea Meissner and Leif Manson. With Jeff offering a plate of burgers to tempt them down, Chelsea convinced Leif that stepping down would make him less of a threat. Leif obliged and took the food, leaving Chelsea to win immunity.

In Millennials vs. Gen X, the challenge was made even more difficult by having both arms tethered to a pole, with no food temptations offered. Although most of the tribe dropped out early on, Jessica Lewis and Will Wahl managed to last over an hour and a half into the challenge. Jessica then lost her balance and dropped, winning Will immunity.

In David vs. Goliath, the challenge was reformatted as a team Reward Challenge, with each team having to pass around eight bags, each weighing 10 pounds, between them. Every 15 minutes, one member had to drop out and pass any sandbags held to another member. After over 30 minutes, Dan Rengering's attempt at showboating by carrying three bags with one hand backfired and cost the purple team the challenge, winning the orange team of Alec Merlino, Alison Raybould, Christian Hubicki, Gabby Pascuzzi, John Hennigan, and Nick Wilson the reward.

In Island of the Idols, this challenge was used as a team Reward Challenge, but was unaired. The team of Dan Spilo, Dean Kowalski, Elaine Stott, Elizabeth Beisel, Noura Salman, and Tommy Sheehan won reward.[1]

In Winners at War, the challenge returned to the format previously used since Heroes vs. Villains, but the castaways were now forbidden to use their free arm to support their tethered arm. In addition, the last woman and man left standing would win immunity and two Fire Tokens. At the 15-minute mark, Jeff Probst tempted the remaining castaways with cookies, peanut butter, chocolate, and milk. Kim Spradlin-Wolfe and Michele Fitzgerald immediately dropped out, giving Denise Stapley immunity. Then, Nick Wilson dropped out after bargaining with Tony Vlachos to give him a Fire Token if he did so, giving Tony immunity as well.

Tom gets drenched in Africa. 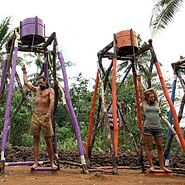 Troyzan and Chelsea compete in One World.

The orange team competes in David vs. Goliath.

Koru competes in Winners at War.