The castaways have to hang on a bar for as long as they can. Once you drop, you lose. Last person left wins.

In Redemption Island, the castaways are suspended over a pool of water and must use only their legs after twenty minutes

The challenge was first used in Survivor: Panama. Shane Powers asked Jeff if they were going to tempted with food. Jeff said no, causing Shane to opt out. It came down to Terry Deitz and Nick Stanbury. Terry outlasted Nick for the first individual immunity.

The challenge returned in Survivor: Redemption Island. The castaways was offered to sit out for Hamburgers and Fries. Only Phillip Sheppard and Steve Wright took the offer. Rob Mariano was the first out and the only one to not make it to twenty minutes. Eventually, David Murphy dropped out and Andrea Boehlke asked if she could have the win. The others obliged and Andrea won immunity.

The challenge in Panama.

Aras, Danielle, Terry, and Sally at the challenge in Panama.

The challenge in Redemption Island. 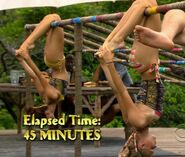