Conquered by Koror on Day 22

Ulong​ is a tribe from Survivor: Palau.

Notoriously considered one of the worst tribes in Survivor history, the tribe is best remembered for failing to secure any tribal Immunity Challenge victories due to their indecision and communication improprieties, despite their raw physical strength. Their subsequent back-to-back losses coined the term "Ulonging." Their tribe color is blue.

On paper, Ulong started the game with what seemed like an unfair advantage: of the nine members of the tribe, only two were over thirty, and by comparison, only three of Koror's nine members were in their twenties. The competition, with its harsh conditions and unusually physical challenges, seemed stacked in favor of a younger, more physically fit tribe. However, it was not a lack of physical prowess, but of teamwork, that was Ulong's undoing at the first Immunity Challenge.

When tasked with having to choose which of several heavily weighted crates bearing survival tools to carry to the end, Ulong waffled on the decision and took a long time to decide. The poor challenge performance was compounded by the fact that no one in the tribe seemed to be able to operate an outrigger canoe properly, with their boat completely going off-course. Koror won the challenge by significant margin, and Ulong vowed not to repeat the debacle.

Stephenie LaGrossa felt that blame for the defeat should fall on the shoulders of Jolanda Jones, the de facto leader of the tribe and the one who advocated carrying as many of the crates as possible. However, Jolanda and her allies felt that her physical prowess would be an asset later in the game, and that the tribe should attempt to cut its apparent dead weight: Angie Jakusz, who had been chosen last for the tribe and whom Jolanda felt had not yet proven herself physically. In the end, Jolanda's overbearing and assertive personality got her voted out in a 6-3 decision. Ulong's willingness to sacrifice its only viable leader and inability to lead through consensus would become a trademark of the tribe's tenure as a Survivor tribe.

Conscious of being a social outcast, as well as the need to prove herself in challenges, Angie began what would become a series of impressive physical performances, earning the respect of her tribemates. One such performance came at the first Reward Challenge, in which Ulong destroyed Koror, winning themselves fishing supplies, which were put to good use the minute the tribe returned to camp.

Ulong was unable to organize themselves at the next challenge, however, and suffered another defeat at the hands of the older Koror. Sentiment had seemingly turned against Kim Mullen, whom many felt had delivered a poor performance at the challenge. However, Kim and Jeff Wilson had struck a romantic bond, and Jeff was thus very inclined to lobby on her behalf. The tribe would instead vote out Ashlee Ashby, who was both ill and ill-equipped for the game.

The next day, the tribes competed in a Reward Challenge, which required brute strength and physical confrontation. Ulong's sheer physical prowess was shown to its fullest when they won by a blowout, winning themselves a sewing kit. However, the their strength did not reflect in the next Immunity Challenge. The extremely physical challenge, in which contestants carried sandbags around a circular course in shallow water, seemed tailor-made for Ulong's younger, stronger group of castaways. However, misfortune struck Ulong as Jeff, regarded as one of their strongest members, accidentally injured his ankle on a stray coconut back at camp prior to the challenge. With one of their chief physical resources incapacitated, Ulong continued to weaken. The strain on Ulong's final three members—prophetically, Stephenie, Bobby Jon Drinkard, and Ibrehem Rahman were the last ones standing—proved too much to bear. Koror won its third consecutive immunity. The tribe was torn between disposing of Kim, who was viewed with increasing animosity due to her perceived lack of work ethic and physical ability, and Jeff, who had verbally asked to be voted out of the game. In the end, the tribe honored Jeff's request and he was shown the door in a 4-2-1 vote.

For the next Reward Challenge, Ulong was asked to select a leader in order to create a bathroom at their camp. After each member of the tribe balked at the responsibility, they all opted to go out fishing instead. When host Jeff Probst arrived and the tribe still had not decided on a leader, the host chastised them for their indecision. The tribe ended up choosing James Miller, a steelworker by profession, thus making him the most equipped for the role, as its leader. Despite his decent efforts to do the task, Ulong suffered another defeat. Ulong's losing streak continued at the next Immunity Challenge, where the men put on a particularly weak showing. In spite of her attempts to rally the women against the men, Kim was voted out unanimously at the next Tribal Council, 5-1.

On Day 12, the two tribes were surprised by a Double Tribal Council with a twist: both tribes would compete in a Reward Challenge, where the winning tribe would be given a reward of root beer and beef stew, as well as the right to sit in on the opposing tribe's Tribal Council. Ulong went on to lose the challenge, but this time, the tribe felt Ibrehem was to blame, as his lack of swimming and diving prowess had wasted time and cost the team dearly. However, at Tribal Council, Probst surprised the castaways by announcing that Koror would vote to give one member of Ulong immunity. Thanks to votes from Janu Tornell, Jenn Lyon, and Katie Gallagher, Ibrehem was given immunity, much to the other Ulongs' chagrin. With their original target protected and no opportunity to decide on a replacement, Ulong's votes were confused and scattered, resulting in a 2-2-1 tie between Angie and Bobby Jon, with the one throwaway vote for James. In the end, Angie was forced to leave the game after a revote.

On Day 13, Ulong was able to make a brief comeback when they won the next Reward Challenge and were taken on a trip to nearby Jellyfish Lake. However, this would be the last challenge that Ulong would ever win, and a lackluster showing by Ibrehem and James at the next Immunity Challenge only accelerated their fate. Sent to Tribal Council for the sixth consecutive time, Stephenie forced a tie between Ibrehem and James. Because of an earlier deal made between herself and Bobby Jon, Stephenie changed her vote during the revote, and James was sent home.

On Day 17, the tribes were tasked to build S.O.S. signals in order to win a reward. Ulong, now dwindled to a paltry group of three, chose to dismantle its old shelter to write their tribe name at the sand. However, Koror's comedic approach to the challenge secured them another win, which was then followed by another Immunity Challenge win. Bobby Jon and Stephenie had formed an alliance, but Bobby Jon began to waver due to his friendship with Ibrehem. Sensing things were not going her way, Stephenie plotted a potential counter-alliance with Ibrehem to vote out Bobby Jon. However, Stephenie's plotting ended up being inconsequential, and Ibrehem was voted out 2-1 on Day 18.

Ulong was now only two-strong and consisted of Stephenie, known for her spirit and tenacity, and Bobby Jon, celebrated for his strong work ethic. At this point, both castaways became increasingly frustrated: Bobby Jon by repeatedly losing to Koror's Tom Westman, and Stephenie by losing in general. The fledgling pair would lose both the Reward Challenge and the Immunity Challenge. As the first ever tribe-of-two to attend Tribal Council, no vote would be cast at the said event. The next eliminee would be determined by a fire-making challenge. Despite Bobby Jon's status as the camp's fire-builder, Stephenie, who was taught to make fire by Bobby Jon himself, narrowly won the challenge, sending Bobby Jon home in an unusual fashion, as Probst noted, the tribe had "definitely did not speak" that night. As Bobby Jon walked himself out of Tribal Council, Stephenie faced one grim truth: she was the only person left of her tribe and had to return to camp alone.

Returning to camp, Stephenie, the last Ulong member left, found even the most basic aspects of camp life more challenging as it should be. Her suffering would come to an end the next day, Day 22, when Tree Mail informed her that Ulong had officially been conquered, and she would become a member of the Koror tribe. Once Stephenie reached Koror's camp, the individual portion of the game officially commenced.

Ulong at their second Tribal Council. 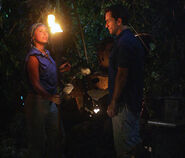 Ulong at their third Tribal Council. 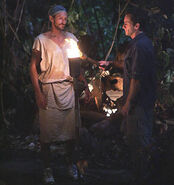 Ulong at their eighth Tribal Council.