Castaways must race across a series of obstacles situated in the water. If they fall off an obstacle, they have to restart the obstacle from the beginning. When they reach the end of the course, they will obtain an item, then head back across the course to shore. The first person to finish the course (and in some cases, solve a puzzle with the obtained item) wins the challenge.

The challenge debuted in Survivor: Vanuatu, where it came down to Ami Cusack and Eliza Orlins as they both got their three flags. However, as they were running up to place their flags in their posts, Ami fell in the water, allowing Eliza to win the car. Coming in second and third place, Ami and Chris Daugherty joined Eliza on a road trip to a resort.

In Survivor: Cook Islands, Ozzy Lusth won yet another Immunity Challenge, beating the six other competitors to win immunity.

The challenge appeared as the final seven Immunity Challenge in Survivor: Cambodia. After Spencer Bledsoe won, Tasha Fox, who was still in the water, accidentally swallowed salt water and had to be helped out by medical. 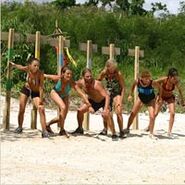 The castaways ready to compete in Vanuatu.

An aerial view of the challenge in Cambodia.

The puzzle in Cambodia.