In Survivor: Guatemala, one at a time, three players run to grab giant puzzle pieces. After all the pieces were retrieved, two other players would solve the puzzle.

In Survivor: Panama, three players run along a path through a field (crisscrossing the other tribe's several times) to reach one of four stations, untie a giant hanging skull-shaped puzzle piece, and haul it back. Then, the two others take the pieces and place them into rotating pieces on a solving platform until they all fit.

In Survivor: China, one at a time, the tribes must enter an abandoned village, grab a color-coded plank, and return. Once all eight have been found, they must slide them into a grid to form an eleven-word phrase made famous by Confucius.

In Survivor: Tocantins, one tribe member at a time would race along a winding path to retrieve a puzzle piece. Each puzzle piece is a large wooden triangular prism with letters written on each of the three faces. Once eight puzzle pieces are retrieved, they would need to be placed in their correct spot in a frame. The pieces would then need to be rotated to display a scrambled phrase.

In Survivor: Guatemala, the tribes were head-to-head to grab the pieces, but Nakúm solved their puzzle first, winning immunity.

In Survivor: Panama, Casaya, despite falling back early, won a barbecue and a trip to a local village, as well as the right to exile someone from La Mina and immunity.

In Survivor: Tocantins, the puzzle pieces were large wooden triangular prisms with letters written on each of the three faces. Timbira won immunity.

Jamie and Brandon with puzzle pieces in Guatemala.

Gary and Amy solving the puzzle for Yaxhá (Guatemala).

The course in Panama.

Shane bringing a piece in Panama. 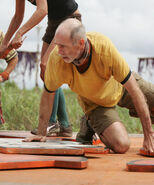 J.T. bringing a piece back for Jalapao in Tocantins.