Coach Wade (5/16)
The Timbira Alliance (also known as the Warrior Alliance) was an alliance from Survivor: Tocantins. The name Warrior Alliance came from Coach Wade's philosophy that the strongest should battle it out at the end. J.T. Thomas was the known as The Warrior, Stephen Fishbach was The Wizard, and Coach was The Dragon Slayer

At Timbira's first two Tribal Council's, the tribe came to unanimous decisions. However, Brendan Synnott's repeated visits to Exile Island eventually made him a target because his tribemates believed he was making relationships with members from the Jalapao tribe. However, Brendan was spared as Timbira won the last three challenges before the merge.

The Dragon Slayer Slays the Dragon

After the tribes merge, Coach Wade formed an alliance with Jalapao member J.T. Thomas, and both agreed to target Brendan. That night Tyson Apostol brought Jalapao member Stephen Fishbach into the alliance, and the next day he brought Debbie Beebe in. Brendan was the target. However, Jalapao member Joe Dowdle was medically evacuated thus canceling the first post merge Tribal Council. Tyson won immunity Day 24. At camp, Coach and Tyson conspired to split the Tribal Council vote four votes for Brendan and three votes for Brendan's close ally Sierra Reed to protect against Brendan using his Hidden Immunity Idol. At Tribal Council, Brendon did not play his idol so he was blindsided thus leaving Sierra as the odd woman out.

While it appeared that Sierra was the next target, JT, Stephen, Jalapao member Taj Johnson-George and Timbira member Erinn Lobdell sided with her at the next Tribal Council and blindsided Tyson for being an immunity threat.

The alliance was unable to recover. Debbie was voted out on night 33 for being a strategic threat. With Debbie gone, Coach was the only member of the alliance left. On Day 36, JT and Coach targeted Erinn while Erinn and Taj targeted Coach, thus making Stephen the swing vote. At Tribal Council, Stephen cast the deciding vote against Coach, sending him out of the game, and thus wiping out the alliance. 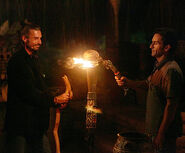