The Final Four Immunity Challenge was The Maze

Jenna confused on who to vote out

The final four at Tribal Council.

Rupert is voted out

Jenna before the Final Tribal Council

The final three starting the Rites of Passage

The Final Three walking up to Tina's Torch

The Final Three at Rudy's torch 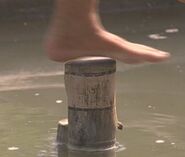 ...which causes Jenna to be disqualified.

Jenna voted out by Boston Rob

Rob and Amber are the finalists of Survivor: All-Stars

"Before I show who I'm voting for, I'd like to say that both of you should just step up, be proud of the way you played. You made it to the Final Two. You beat us all. That's my vote -- Boston Rob. You do deserve it. You ruled this game physically. This is a large sum of money; I hope you win it."

"Rob, do you remember back in the middle of the game, when you and I shook hands, looked each other in the eye, and I promised you that I would never write your name down? I'm a woman of my word."

"Rob... I thought of you as a brother. I stayed and defended you for 36 days. All over saying something about I was gonna vote you off? Hey, never once crossed my mind, and when you find out the true story, maybe you can call and apologize."

"I am such a sucker. I am such a sucker, but you know what? In the end, friendship rules, and I know that we have a really good, tight friendship, so I'm giving you the million bucks because I love what we have, and I think it's still there; it's just damaged. So take it, man. Take it and run with it, all right? I love you."

Rob proposes to Amber and she accepts

Amber is declared the Sole Survivor, of Survivor: All-Stars

Jerri gets booed by the audience
Add a photo to this gallery
Retrieved from "https://survivor.fandom.com/wiki/The_Sole_Surviving_All-Star/Gallery?oldid=509697"
Community content is available under CC-BY-SA unless otherwise noted.