The outcasts from their original tribes

Lillian Morris (Runner-Up)
The Outcasts​ is the "ghost" tribe from Survivor: Pearl Islands.

Comprised of the first six eliminated castaways, they returned to compete against the Drake and Morgan tribes in a special Immunity Challenge in an attempt to continue their pursuit of the million dollar prize and the title of Sole Survivor. Their tribe color is purple.

Fueled by their desire in collecting revenge, The Outcasts managed to edge out Drake for a first-place finish, ensuring that two of them would re-enter the game. That night, Shawn Cohen was voted out at Drake's Tribal Council and Osten Taylor quit at Morgan's. The Outcasts then went to their own Tribal Council, where Jeff Probst noted that for the first time since the show began, a tribe was excited to go to Tribal Council. Jeff gave the eliminated players a chance to plead their case as to why each of them deserved to return in the game, after which the tribe would vote two people back into the game, casting two votes each and being unable to vote for themselves. In a 3-3-2-2-1-1 vote, Burton and Lillian both re-entered the game. With Burton and Lillian's torches lit once again, the eliminated Outcasts said their goodbyes.

With two Outcasts back in the game, Jeff handed them a canister containing Buffs, one for Drake and another for Morgan. Lillian reached in first and drew Morgan's, thus sending her back to her old tribe and automatically sending Burton back to his. This effectively disbanded the tribe.

The Outcasts twist has received mixed reception from both the castaways and fans alike. As implied by cast members Andrew Savage and Osten Taylor, they showed complete distaste for the twist. Various forums and fans also criticized the twist, stating that it completely hurt the show's integrity by deviating its premise. Survivor host Jeff Probst revealed that he also hated the twist, but was overruled by Executive Producer Mark Burnett. Furthermore, how the eliminated contestants were sequestered was not fully explained at the time, with some fans speculating that the sequestered contestants were actually living comfortably while biding their time until the day they actually reveal themselves to the tribes, giving them an unfair advantage against the remaining contestants. In "What the...? (Part 1)", Jeff Probst had claimed that The Outcasts were deprived of nutrition during their sequester time, though he revealed in a 2020 interview The Outcasts had actually not been deprived, stating that they "went to a hotel, ate, and had a shower."[1]

With the introduction of other similar twists in later seasons, however, The Outcasts twist has since been viewed more positively. When the concept of "resurrecting" voted out castaways was revisited via Survivor: Redemption Island's titular Redemption Island, the twist was compared negatively to The Outcasts, as the latter gave all those eliminated an equal opportunity to come back as opposed to what some would deem "unfair" duels. The former twist was also critiqued for continuing past the merge and creating "dead airtime" by focusing on the happenings at the Redemption Island camp. Similar comparisons would eventually be made to a greater extent towards the Edge of Extinction twist introduced in the so-called Survivor: Edge of Extinction. 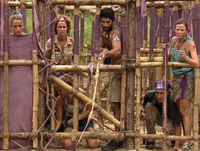 The Outcasts competing in their only challenge. 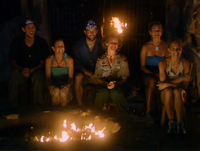 The Outcasts at their only Tribal Council. 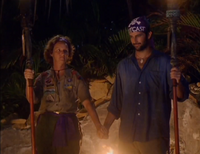 Lillian and Burton voted back into the game.