Castaways must race through a series of physical and mental obstacles. The first tribe, team, or individual to complete the course wins.

The challenge was first used as a tribal Immunity Challenge in Borneo, with each tribe having two pairs racing through obstacles. The first pair must run the first half of the course before meeting up with the second pair at an obstacle called the "blown bridge". Once they reach the other side, all four members must run the second half of the course to the finish line. In a close race, Tagi held a narrow lead throughout the challenge, crossing the finish line seconds before Pagong, sending Pagong to Tribal Council.

The challenge reappeared in The Australian Outback where the final eight were required to split up into pairs consisting of one man and one woman in a Reward Challenge. Two pairs would face off in each heat, with the winners of each heat then facing each other in a final heat. In the final heat, the team more physical team of Colby Donaldson and Jerri Manthey maintained a lead from the pair of Amber Brkich and Keith Famie, holding onto it to win reward.

In Africa, the castaways are again teamed up in four pairs of two. Like in The Australian Outback, the winners of the first two heats would face off in the final round. In the final round, the unlikely pair of Brandon Quinton and Frank Garrison defeated the pair of Ethan Zohn and Kim Johnson to win reward.

In Thailand, the final eight were divided into pairs and run the course in two separate heats, with the winning team in each heat again facing off in the final round. However, the winning pair would then face each other in a puzzle. In the end, the team of Brian Heidik and Helen Glover came out on top, with Brian besting Helen in the puzzle to win reward.

In Pearl Islands, the challenge took place at the wreck of an old Spanish galleon. The castaways again ran in pairs, with the winning pair in each heat moving on to the final round. In the final round, each pair would have to run the same course, but now collect bags of puzzle pieces along the way, then use the pieces to solve a puzzle. The team of Burton Roberts and Lillian Morris defeated the team of Jon Dalton and Rupert Boneham in the final round to win reward.

In All-Stars, the challenge was used as both a Reward and an Immunity Challenge. In the first part, the castaways would compete in an obstacle course in two teams of four, with the winning team earning the right to compete for immunity. In the obstacle course, the team of Jenna Lewis, Kathy Vavrick-O'Brien, Rupert Boneham, and Tom Buchanan fell behind early when Rupert and Tom had difficulty crossing the balance beam, allowing the team of Alicia Calaway, Amber Brkich, Rob Mariano, and Shii Ann Huang to pull ahead and win reward. In the second part, Rob M. defeated the other three in a slide puzzle to win immunity.

In One World, it was used as the final five Immunity Challenge, where the castaways had to open a gate stuck by knots, cross a maze, and pick up bags of puzzle pieces strung on a net. After assembling the puzzle, they must decipher clues that would give them three numbers. They must then climb up a platform, use the three numbers to unlock a key and raise the flag. In a tight race, Kim Spradlin raised her flag before Alicia Rosa and Chelsea Meissner to win immunity.

In Millennials vs. Gen X, the challenge was used as the final six Reward/Immunity Challenge in which the castaways had to race through an obstacle course while collecting bags of number tiles which they would use to solve a combination lock and release a key. The key would unlock a set of puzzle pieces which they must use to solve a hanging bat puzzle. Jay Starrett took the early lead, but made a critical error in not covering his combination lock, allowing everyone to copy him. The copying continued at the bat puzzle, in which David Wright surged ahead to win immunity.

In Game Changers, the challenge was used as a combined Reward/Immunity Challenge. On a course similar to the one used in San Juan del Sur, three members of each tribe would have to go through the course. Upon reaching the puzzle, a fourth member would untie the puzzle pieces, which the last two must use to solve the puzzle. In a tight race between the three tribes, Nuku finished first, while Tavua solved their puzzle seconds before Mana, winning both tribes immunity and sending Mana to Tribal Council. Notably, Troyzan Robertson found Tavua's Hidden Immunity Idol at the back of their puzzle table. 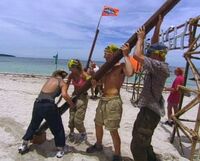 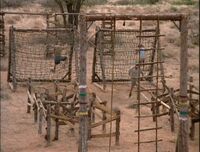 Clay and Ken at the challenge in Thailand. 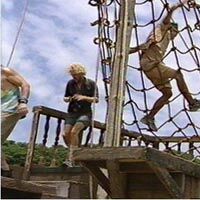 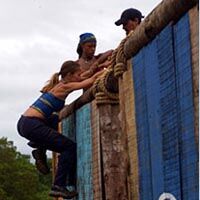 The course in One World.

Adam and David compete in Millennials vs. Gen X.

Mana competes in Game Changers.
Add a photo to this gallery

Retrieved from "https://survivor.fandom.com/wiki/The_Obstacle_Course?oldid=580851"
Community content is available under CC-BY-SA unless otherwise noted.