The contestants (sometimes in tribes, but usually individually) head into a labyrinth of passages, corridors, and turns. They have to reach a certain number of checkpoints either in order or any order they wish, collecting an item at each one. After they collect all their items, contestants must find their way out of the maze. Mazes have also been done where the castaways are blindfolded, called Braille Maze.

The challenge made its debut in The Australian Outback. The tribes had to collect five pendants in the correct numerical order. Because there was no apparent unfairness due to having a maze for each tribe, everyone in the competition competed. Ogakor maintained the lead early and Kucha was unable to catch up due to having gotten lost. Ogakor won immunity for the first time in days, sending Kucha to Tribal Council.

The challenge returned in Marquesas. The format was similar to The Australian Outback. Rob Mariano led Rotu to victory, once again sending the Maraamu tribe to Tribal Council.

The challenge's next appearance, called Obstacle Puzzle Maze, was in All-Stars as the final four Immunity Challenge. Unlike its previous two appearances, it was an individual challenge. The castaways had to collect eight ladder rungs in any order. After the castaways had obtained them all, they must arrange them in the correct order to reach the top of the platform. The first person to do so wins. Everyone was relatively even, although Rob Mariano had a slight lead. In the end, Amber Brkich caught up and passed him. Amber won immunity for the first time in the game.

The challenge was also used in Vanuatu as the final four Immunity Challenge, where it was known as Snakes and Ladders. This time, the maze was vertical. The castaway had to collect eight bags of puzzle pieces. After collecting all of the bags, they must arrange them to spell out "Final Three". The first person to do so wins. Scout Cloud Lee was quickly out of the challenge due to her age and her knee implants. In a close race, Chris Daugherty was the first to complete the puzzle, winning himself immunity.

The challenge reappeared in Guatemala as the final four Immunity Challenge, known as Maya Maze. The castaways had to collect pieces and arrange them to form a Mayan deity. Everyone was somewhat even, with the exception of Lydia Morales who was lagging. Rafe Judkins was the first to complete the puzzle, winning immunity.

In Gabon, the challenge, called A-Mazing Gabon, was used as the final five Immunity Challenge. The castaways had to dig a hole under a wall, cross a maze made out of planks, and untie a series of knots that would open a gate that led to a maze with 25 Gabonese huts. They must find three bags of puzzle pieces in the huts and take them one at a time to a platform. Bob Crowley got the three bags and finished the puzzle first, winning immunity.

The challenge reappeared in Redemption Island as the Final Immunity Challenge. Called Meso Maze, it once again saw the castaways collecting puzzle pieces to ultimately spell out a phase. It was neck and neck between Rob Mariano and Ashley Underwood, who even helped each other out on the puzzle. Rob was the one who completed his puzzle first and won immunity.

In One World, it was used as the final five Immunity Challenge, where the castaways had to open a gate stuck by knots, cross a maze, and pick up bags of puzzle pieces strung on a net. After assembling the puzzle, they must decipher clues that would give them three numbers. They must then climb up a platform, use the three numbers to unlock a key and raise the flag. In a tight race, Kim Spradlin raised her flag before Alicia Rosa and Chelsea Meissner to win immunity.

In Cagayan, the challenge was once again used as the Final Immunity Challenge. In this version, called Roundabout, the final three had to race out into a maze with turnstiles where they had to collect four medallions. Once they had all four medallions, they then had to use them to open a chest, inside of which were puzzle pieces in the form of wooden cogs. Once the puzzle is put together, they then had to turn the cogs raising a flag. The first player to raise the flag would win immunity. Kass McQuillen was initially leading, however, she became stuck looking for her last piece. This allowed Woo Hwang and Tony Vlachos to catch up and start on the puzzle. Despite Kass coming from behind, Woo beat her by half a second for the final immunity.

In Game Changers, the challenge, Maybe I'm a Maze, was used as the final six reward and Immunity Challenge. The castaways had to run through the large maze and up a net to retrieve bags of puzzle pieces. When all three bags of puzzle pieces were retrieved, the castaways would come back and assemble a compass rose puzzle. It came down to Sarah Lacina and Brad Culpepper. After Brad realized he was missing a piece, he quickly looked in his bags and found it and placed it in the compass puzzle, winning immunity.

In Ghost Island, the challenge, Vin Skully, was used as the final six reward and Immunity Challenge. The final six castaways had to race through an enormous, skull-shaped maze, collecting three bags of puzzle pieces. Once all the bags were retrieved, they were to race back to their station and solve a vertical puzzle. Sebastian Noel and Wendell Holland seized the early lead, though they were quickly caught up to by Domenick Abbate. In the end, Wendell managed to complete his puzzle first, winning immunity and reward.

The mazes in The Australian Outback.

The maze in Marquesas.

The maze in All-Stars.

The maze in Vanuatu.

The maze in Guatemala. 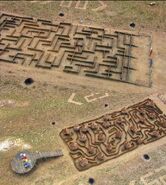 The mazes in Gabon.

The maze in Redemption Island.

The maze in Cagayan.

The maze in Game Changers.

The maze in Ghost Island.
Add a photo to this gallery

Retrieved from "https://survivor.fandom.com/wiki/The_Maze?oldid=593303"
Community content is available under CC-BY-SA unless otherwise noted.