Survivor Wiki
Register
Don't have an account?
Sign In
Advertisement
in: Episodes, The Australian Outback Episodes, Survivor (U.S.),
and 2 more

The Gloves Come Off

The Gloves Come Off

The Gloves Come Off is the fifth episode of Survivor: The Australian Outback.

On Day 13, all sorts of things are happening at Ogakor camp. For one thing, the nearby forest fire continues to rage, sending waves of smoke towards camp. For another, Colby's Tribal Council switcheroo has blindsided Jerri and Amber, who are now in the minority in their tribe. Jerri tries to convince Colby to stick with her instead of Tina and Keith, but Colby is non-committal.

On Kucha, it's time for the tribe to feast on another chicken. Kimmi again voices her displeasure about killing the chickens. She and Alicia get into a heated argument. Alicia says that Kimmi is complaining too much, while Kimmi accuses Alicia of being rude. "Don't wave your finger in my face," says Kimmi. "I will ALWAYS wave my finger in your face," Alicia retorts. The encounter increases the tension between the two. Meanwhile, the rest of the tribe has gotten annoyed by Kimmi's tendency to not bathe. Kimmi says she has no intention of bathing in the "incredibly gross" water.

Each team gets Tree Mail telling them to build a three-sided stretcher called a travois. They then use the travois for the Reward Challenge, in which two people must rescue their three tribemates by carrying them on the travois. In a close race, Kucha wins yet again, sending Ogakor's Amber into tears "I'm so tired of losing," she laments. Kucha wins shampoo, toothbrushes, and spices.

Back at Kucha's camp, the tribe members use the reward to clean themselves up, even Kimmi. They boast about their domination of Ogakor thus far. On Ogakor, the demoralized tribe prepares for the next challenge.

The tribes reconvene for their fifth Immunity Challenge. From the start, Ogakor works together more smoothly than Kucha does, and Ogakor finally pulls through to snap their challenge losing streak. The tribemates celebrate. Back at Kucha, Alicia and Jeff think they have a consensus to vote off Kimmi. Elsewhere, though, Elisabeth and Rodger note that Alicia has a strong personality, and that the tribe might get along better without her.

At Tribal Council, though, it's unanimous—Kimmi takes six votes (her vote is for Jeff) and gets the boot. Kimmi is the fifth victim of Survivor: The Australian Outback. 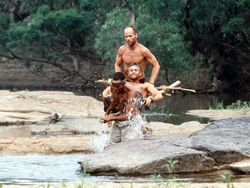 Each tribe selects two members to become "rescuers." The other members are placed at predetermined accident locations. Using a stretcher, each tribe must locate their tribemates at the accident locations and bring them back, one by one, to the "first aid tent." First tribe to rescue all of its members and cross the finish line wins.
Reward: The winning tribe wins bath implements and all of the items chosen from a catalog by both tribes. Kucha chose blankets and Ogakor chose soup mix and spices.
Winner: Kucha

Challenge: The Maze
Each tribe must race against the other, collecting five medallions in a specified order while navigating through a giant maze. First tribe to collect all five medallions in order and to exit the maze wins.
Winner: Ogakor