Palau
Micronesia
The Gauntlet is recurring tribal challenge that originated in Survivor: Palau, and reappeared in Survivor: Micronesia. It is an obstacle course that requires physical prowess, including the ability to fend off direct opposition.

One at a time, contestants traverse an obstacle course (containing obstacles such as wobbly or floating bridges, rolling barrels, stepping-stones, balance-beams and rope-lines). As they do so, members of the opposite tribe attempt to knock the contestants off the course by swinging large canvas bags at them. If a contestant falls off the course, they must return to the beginning. At the end of the course, the castaway collects a pennant, which they then return to their tribe mat by way of the obstacle course. The first tribe to collect a given number of pennants wins the challenge.

The challenge debuted in Survivor: Palau for tribal reward. The contestants had to traverse a rope swing, cross over three rolling barrels, a balance beam and a 'wobbly bridge'. They then had to make their way over a two-rope hand-over-hand bridge to retrieve a pennant and return it to the starting line. Meanwhile, two members of each tribe used swinging bags to try and knock their opponents into the water as they crossed the three middle obstacles. If the contestant fell off the course at any point they would have to go back to the start. Ulong won the challenge after acquiring ten pennants, winning fishing gear.

In Survivor: Micronesia, the challenge was used as a combined tribal reward/immunity. Airai won the challenge after gaining five pennants. In addition to immunity, they also won pizza and beer to enjoy at camp. 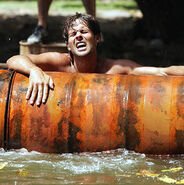 Bobby Jon during the challenge. This was also used as his motion shot in the opening for Palau.