Survivor Wiki
Register
Don't have an account?
Sign In
Advertisement
in: Tribes, The Amazon Tribes, Starting Tribes,
and 5 more

A native fish with the same name

Merged with Jaburu on Day 20

Tambaqui​ is a tribe from Survivor: The Amazon.

Notable as the first all-male tribe in the show's history, Tambaqui was driven by testosterone, believing they would easily defeat their female rivals at Jaburu. However, despite flourishing in the survival aspect of the game, their bravado lost them most of the early challenges. Their tribe color is blue.

This all male tribe was originally united in their perceived superiority over their female counterparts due to their collective skillsets. However, that did not prevent some friction in the early stages of this tribe mostly cetered around Roger's leadership style. It did not sit well with some of the younger players, particularly Ryan. Butch tried to motivate the tribe with his "believe in yourself" banner which was his luxury item. As Butch would later point out, Tamabaqui "believed in themselves too much" in the Day 3 Immunity Challenge. Despite Dave and Rob's mentally challenging professions, they were unable to solve the puzzle quickly enough in large part due to Daniel's struggles on the balance beam. Because Ryan was a part of that duo with Daniel and he was perceived as lazy around camp, Ryan was a target for the first vote. Ryan, Daniel, and Matthew were annoyed by Roger's orders and Dave went rogue targeting Daniel, leaving Rob as the swing vote between Roger and Ryan. Ultimately he took out Ryan resulting in a 4-3-1 vote.

Another recurring theme particularly among the younger members of the tribe was talking about the beauty of the Jaburu members, particularly Shawna, Heidi, and Jenna. Rob's luxury item, the Magic 8 Ball, provided some laughter as well, although Rob's only rule was that they couldn't ask it questions regarding the results of challenges. Daniel and Matthew retained a strong bond particularly through their knowledge of Mandarin, but Matthew was also aware that his association with Daniel, who was a likely target should Tambaqui lose again, could also hinder his own game. A conversation between Alex and Roger regarding Roger's opinions on gay marriage caused some friction between the core alliance, which Rob was pleased with as it meant a potential opportunity to vote out Roger. However, on Day 9 following a 2nd defeat in 3 Immunity Challenges, Daniel's second attempt to oust Roger failed as the tribe unanimously voted out Daniel.

Though Matthew was left as the sole outsider following Daniel's vote out, Matthew's outdoor skills and ability to catch fish caused the physically weaker Rob to fear he could become expendable. Nevertheless, the two of them started to grow close. The following reward and Immunity Challenge were survival skill based which lead to two emphatic victories for Tamabaqui. In good spirits, the men started to get overconfident in their skills again, which Matthew feared would lead to some mistakes. This was the case when Alex sustained a minor head injury when chopping wood. On Day 13, Dave was invited to a getaway reward with Jenna. This led to a swap where both Dave and Jenna would draft the other 10 players into two new tribes. Dave maintained his allegiance to Roger and Butch by selecting them to stay on Tamabaqui, much to Rob's suspicions, sending Alex, Rob, and Matthew to Jaburu.

Post swap Tamabqui saw both original Jaburu and Tambaqui get along well, but strategically they were initially divided along tribal lines. The women were conflicted as to who to target following losing the first Immunity Challenge post swap, so they drew straws to determine they would target Butch. Dave on the other hand used the knowledge he obtained from Jenna at the reward to try to convince Heidi to flip on Jeanne, who was the next target on Jaburu if it weren't for the swap. Heidi went along with the plan, sending Jeanne out in a 4-2 vote which left Christy on the outs. Roger tried to motivate the remaining tribe members hoping they could stay united, but in reality Dave, Butch, and Roger were planning on reuniting with the original Tambaqui members going into the merge. Tambaqui won the next Immunity Challenge and with Shawna voted out of Jaburu, original Tambaqui entered the merge with six original members. 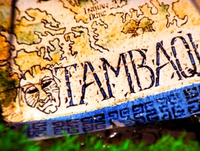 Tambaqui's shot in the intro. 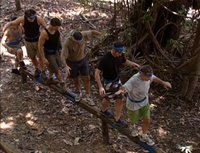 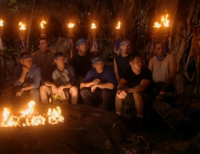 Tambaqui at their first Tribal Council. 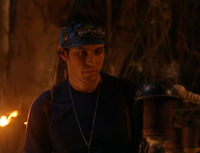 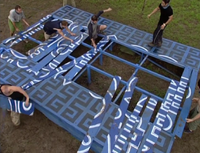 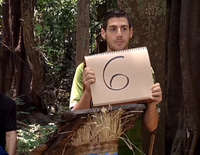 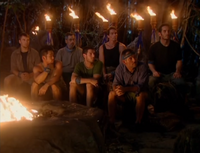 Tambaqui at their second Tribal Council. 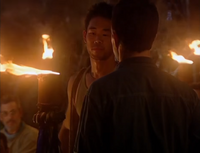 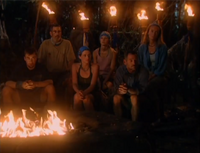 Tambaqui at their third Tribal Council. 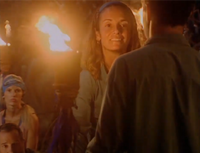