Survivor Wiki
Register
Don't have an account?
Sign In
Advertisement
in: Tribes, Blood vs. Water Tribes, Starting Tribes,
and 4 more

Merged with Galang on Day 19

Tadhana is a tribe from Survivor: Blood vs. Water.

Originally comprised of new players competing against their returning loved ones from the Galang tribe, the original Tadhana tribe was weaker in challenges than its counterpart. Their tribe color is red.

On Day 1, the First Impressions twist occurred. This resulted in Laura Boneham being voted out from Tadhana and Candice Cody being voted out of Galang. John Cody decided not to take Candice's place, keeping Tadhana's entirely new player tribe status in tact. Laura's vote out gave Tadhana a 5-4 male majority which Brad Culpepper quickly noticed and exploited, forming an alliance with Caleb Bankston, Hayden Moss, Vytas Baskauskas, and John. Gervase Peterson's taunting after Galang won the Day 3 Immunity Challenge and Marissa Peterson vocally expressing issues with Brad resulted in Marissa being voted out that night. The men's alliance stayed in tact despite speculation that John and Rachel Foulger may be aligned. Vytas suggested they target Rachel in an attempt to get Tyson to take her place on Redemption Island and weaken Galang. After voting Rachel out, Tyson decided not to take her spot since Rachel felt he had a good chance to win. From that point on, the Redemption Island duels would feature a lot of animosity towards Brad, the perceived leader of the dominant Tadhana alliance.

Tadhana's shot in the intro.

Laura B. voted out. 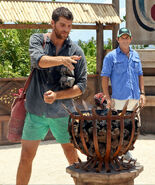