Africa
Pearl Islands
All-Stars
Palau
Swahili Scramble (also known as What Do You Make Of This?, Survivor Scramble, and Under Current) is a recurring mental challenge in Survivor.

The castaways had a word scramble with a certain number of words, all with a theme. After they solved the puzzle, the must used the intersecting letters to solve a word. First person to unscramble the word wins.

The challenge was first used in Survivor: Africa under the name Swahili Scramble. The castaways had to find twelve Swahili words, then use the letters to make a nine letter word. Lex van den Berghe had an early lead and kept it. Lex solved the word, "Avalanche", and won a Chevy Avalanche pickup truck. Lex was allowed to used the truck to deliver supplies to a local hospital.

A variation was used in Survivor: Pearl Islands; each castaway has a board with three words on it broken up by their letters: "Survivor Pearl Islands". The castaways must use the letters to form twenty new words. Words must be in English and must be spelled correctly. Plurals, proper names, acronyms, as well as the words Survivor, Pearl and Islands are not allowed. If a castaway broke any of these rules, he or she would be eliminated from the challenge. The first player to form twenty words, spelled correctly, wins. Christa Hastie, Tijuana Bradley, and Jonny Fairplay all thought they had it, but each had broken a rule, thus disqualifying them all from the challenge. Burton Roberts was initially declared as winning immunity, but he lost it when Jeff Probst realized he'd misspelled a word that he failed to notice (he misspelled liaison as liason). Because of this, a second round was held between Darrah Johnson, Lillian Morris, and Sandra Diaz-Twine. In this round, the three women had to find as many four or more letter words as possible from "Outwit, Outplay, Outlast" in one minute. Darrah found the most words and won immunity.

The challenge was reused in Survivor: All-Stars as the final five Immunity Challenge. This time, each castaway had to find the names of the seventeen starting tribes from the first eight seasons of Survivor. Amber Brkich initially had the lead and the first castaway to start unscrambling the eleven-letter word. However, Rob Mariano was not far behind. In the end, Boston Rob was the first to figure out the phrase (Chaboga Mogo, the name of the season's merged tribe) and thus won immunity.

A modified version was used in Survivor: Palau. Because Ulong was down to its last two members, Koror selected Coby Archa and Gregg Carey to compete. The tribes had to race out to a series of floating platforms, swim under them in order to collect puzzle pieces, swim back to shore, and drop off the puzzle pieces on the beach. Once they had collected all the pieces, the tribes assembled the puzzle and solved a word jumble using the pieces. They were required to find listed words in the grid, take the letters used in more than one word, and rearrange them to form a mystery three-word phrase ("victory at sea"). Koror won their seventh consecutive Immunity Challenge, sending Ulong to a unique two-person Tribal Council.

The Wordsearch in Africa.

Teresa competing in the challenge in Africa. 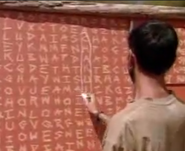 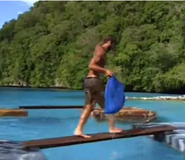 Bobby Jon bringing the pieces back for Ulong in Palau.

Ulong solving their word search in Palau.
Add a photo to this gallery

Retrieved from "https://survivor.fandom.com/wiki/Swahili_Scramble?oldid=593362"
Community content is available under CC-BY-SA unless otherwise noted.