Castaways must answer a series of questions about the local culture. The person or tribe who answers the most questions correctly wins.

Starting from Marquesas, the castaways had items such as masks and pots, usually tied by ropes. Each correct answer gives the right to break an item or cut a rope from an opponent. When a contestant had all broken items, would be out of the challenge. The last contestant remaining would win.

In Survivor: Borneo, Sean won an overnight trip on a yacht, which he shared with Richard, and a Visa card. On the yacht Sean met his dad Jim who he got to talk with on the yacht. After returning to camp Jim gave the remaining contestants care packages from their loved ones before leaving on the yacht.

In Survivor: The Australian Outback, the challenge would be used as the Immunity Challenge in "The Killing Fields". The castaways were tested on their knowledge of the Australian environment. Kucha won the challenge.

In Survivor: Africa, the challenge was used as a Reward Challenge. The tribes started at the top of bleachers. Every time a tribe answers a question correctly they will move down one row. The first tribe to reach the ground wins. Samburu won the challenge for a buffet.

In Survivor: Marquesas, each player has a station with three ropes each tied to a bundle of coconuts hanging from trees. A correct answer gives a player the right to cut one of the other players' ropes, causing a bundle of coconuts to fall to the ground. Losing all three bundles means elimination from the game. Sean was the first eliminated, followed by Vecepia and Kathy. The challenge ends with Tammy cutting loose Robert's last coconut bundle, giving her individual immunity.

In Survivor: Thailand, each castaway who answered a question about Thai culture correctly was permitted to snuff another castaway's torch. Helen won immunity, narrowly beating Ted.

In Survivor: The Amazon, each castaway will have a mask attached with three ropes to a suspended log. The castaways will be asked a series of questions about Amazonian and Brazilian culture and survival skills. If a player gets a question right they are allowed to cut one rope from any contestant. Once all three of a castaways ropes are cut, the log will smash the mask, eliminating that player. Last castaway with their mask intact wins immunity. The challenge came down to Heidi and Jenna. Jenna answered the final question correctly, winning immunity.

In Survivor: Pearl Islands, the castaways must answer question about pirate folklore. Each castaway who answers correctly would get to place coconuts in the bins of another castaway. When a castaway receives five coconuts, they are out of the challenge. Last castaway standing wins immunity. The challenge's final two were Rupert and Christa. Rupert answered the final question correctly and placed the fifth coconut into Christa's bin, winning immunity.

In Survivor: Vanuatu, each castaway is assigned three skulls. The castaways must take turns answering questions about Vanuatu history and culture. Each time a castaway answers a question correctly, they must set another player's skull on fire. The men were quickly eliminated as the women burned all of their skulls. Leann won a picnic of chicken wings and champagne, and chose Julie to join her.

In Survivor: Palau, each player would be assigned a fire wok suspended over the water. Each time a Survivor correctly answers a question about Palauan culture/history, they may lower an opponent's wok. The last person with their flame still burning would win. Gregg won and shared a yacht trip with Jenn and Katie.

In Survivor: Guatemala, each tribe member has three pots of corn and an answer cube. They are then asked questions on Mayan culture. Each question answered correctly allows them to smash one other tribe member's pot of corn. Cindy won and took Rafe with her on a reward of a feast, waterfall pool and massage.

In Survivor: China, right after Tribal Council, the challenge was held for an overnight trip at a Shaolin temple. As the challenge progressed, Peih-Gee eventually won the challenge. She was given the offer to choose two other tribemates to join her. She chose her only ally left in the game Erik and Denise, viewing her as a potential swing vote.

In Survivor: South Pacific, the castaways would be asked a series of survival related questions. If a castaway were to answer the question incorrectly, they would be out of the challenge. The last castaway to answer a question correctly would win. The challenge was just after Dawn's elimnation. Sophie beat Whitney in the final question, winning immunity. 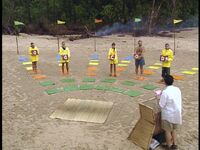 The castaways competing in Borneo. 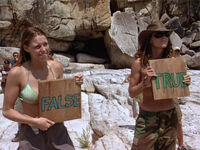 Kimmi and Jerri giving their answers in The Australian Outback.

Kim giving the answer for Boran in Africa.

Tammy at the challenge in Marquesas. 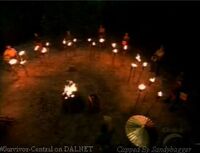 The challenge in Thailand. 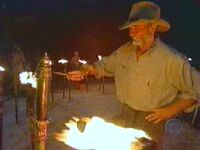 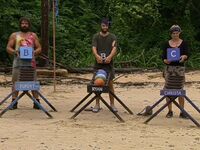 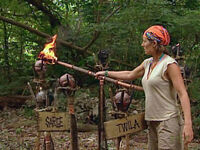 Ami lights one of Sarge's skulls in Vanuatu.

The final six gives their answers in Palau.

The castaways answer the questions in China.