Survivor Wiki
Register
Don't have an account?
Sign In
Advertisement
in: Challenges, Recurring Challenges, The Australian Outback Challenges,
and 28 more

The castaways get a second chance to revisit some of the challenges from earlier in the season.

In early seasons, the challenge was simply one general obstacle course. However, since Survivor: All-Stars, the challenge is now generally held in separate rounds. Whoever finishes the final task first wins the challenge.

The challenge was first used in Survivor: The Australian Outback for a Pontiac Aztek that converts into a tent, with a meal and hot shower included. The castaway start blindfolded and feet shackled. The Castaway must use two carabiners to navigate a ropes course, keeping one connected at all times. When they reach the end of the course, they will ring a bell, allowing them to take off their blindfold. Then, they must solve a slide puzzle. When they compete the puzzle, the castaways will get a key to unlock their shackles. Then, the castaways take a bucket, filling it with water from a barrel. They then cross a narrow balance beam to a fire scale and filled the water bucket until it started spitting water out. After that, the castaways must build a fire to burn though a rope, making it raise and setting a fuse. Colby consistently had the lead and won. In addition to everything Colby won in the reward, he also got a surprise visit from his loved one, his mother.

In Survivor: Africa, the challenge was used as an Immunity Challenge where the castaways must traverse an obstacle course built from elements from past challenges of the season. The first person to traverse it would win. Lex won.

In Survivor: Marquesas, as a Reward Challenge, each castaway had to construct a tiki. Second, they had to race to a pile of coconuts, crack them open and drain the juice, filling a bamboo tube. Then they had to continue through the jungle to find stilts tied to a tree. Once the stilts were untied, the Survivors had to successfully walk ten feet on the stilts without falling. After completing this leg of the Challenge, they would have to find another pile of coconuts and crack them open to find a key that would be used to unlock a crate. Inside the crate would be a slingshot. Finally, with slingshot in hand, the Survivors would have to find an hourglass-shaped structure with a wooden tiki underneath. Sean won the challenge and earned a car as reward.

In Survivor: Thailand, the contestants would have to dig deep into the sand to retrieve a wicker ball and race over a bamboo balance beam. Next, they would have to push the wicker ball through a fishnet and place the ball on a pedestal. The next stage consisted of solving a puzzle, which would release a knife. They were then to take the knife and cut a rope that released a bag of material that would help them negotiate their next task of retrieving a key from inside a jail cell. The final stage was a surprise Thai delicacy (tarantula), and the first person to consume it would win Immunity. Brian won and secured a place in the final three.

In Survivor: The Amazon, the castaways would compete for reward and must untie a series of knots to open a gate, flip over seven puzzle pieces and arrange them to form a traditional image, rope swing across a gully, decode a wheel puzzle, grab the corresponding key, unlock a flying fox, and slide down to retrieve the final key. Matthew won a car and shared a barbecue with Rob.

In Survivor: Pearl Islands, the challenge was used for reward for a trip to the ruins of Panama Viejo and food. The castaways start by having their hands and ankles tied to a post. Once untied, the castaways would dig under a bamboo fence and used the rope and a pair of coordinates to find a key. They will used the key to enter the jail cell. Then, the castaways will used Sticks and rope to build a pole to retrieve a second key, unlocking the other side of the jail cell. Next, the castaways would go to a firing range and break three plates. Each plate had a bag of puzzle pieces attached to it. At the puzzle station, the castaway must used them to unscramble a famous pirate phrase (Jolly Roger). First person to do so win. Although it was a close race in the beginning, Burton pulled away to win the challenge. Burton elected to take Jon with him. It was later revealed that Burton won a car for winning the challenge.

In Survivor: Vanuatu, the castaways first had to go under a mud crawl. Scout was last and was eliminated. The second round, the contestants had to catch a pig with an orange stripe. Eliza was unable to do so and was eliminated. Next, the castaways had to untie knots to rearrange a tiki puzzle. Chris had the lead but lost a piece, allowing Julie and Twila to advance to the final round. In the final round, the contestants had to first cross a balance. Then take a slingshot and knock out all of the targets. Julie had the lead all the way and won. Julie decided to take Chris with her on the reward to a horseback on Mt. Yasur.

In Survivor: Palau, the castaways must go up a tire ladder and traverse a net maze. First five move on. After that comes a sliding puzzle (solvable in 46 moves). First four move on. After that, the remaining four must eat three balut. First three move on. The final three must untie a box, grab the flag inside, and raise it up a flagpole. First two move on. The two finalists must break three colored tiles with a replica WWII cannon gun. The first person to accomplish that wins immunity. Tom and Ian made it to the final round. Tom failed to hit a target, while Ian easily hit all of his targets and won immunity.

In Survivor: Guatemala, the castaways will race across a balance beam, untying three sets of macanas as they go. The first three castaways to cross the finish line win. In round two, they would use the macanas to break a tile thirty feet away. The first two move on to the final round, where they will solve a puzzel based on a maya calendar. Once it is solved, they hop into a cart and chop a rope with a machete, sending them down a ramp. Cindy won a car and chose Stephenie to a night at an archeologist camp with a nice feast.

In Survivor: Panama, the challenge was used as a "Loved Ones Challenge". The five castaways must dig in a marked area for a buried bag. First four move on. Those four take it through a commando crawl, climb to a raised bar, untie a wooden snake, climb back down, take both through another commando crawl, and over a sandhill. First three move on. Those people take the bag and snake over a sandhill into a pool, untie a hanging fish, and take all three over another sandhill. First two move on. The final two take all three items with them through a cage-like network of ladders to the finish. The winner gets a chance to decide who will get to see their loved one and how much time they will spend with them. Terry won and chose Shane to spend time with their loved one.

In Survivor: China, castaways started by throwing three metal stars a at board with varying point values. Todd had the lowest score with one was eliminated from the challenge. The next round, the castaways had to eat two balut. Denise gave up easily and was out, though the others still had to eat their balut. In the third round, the castaways had to bounce a ball on a drum all the way to the bin. Amanda made it first. Peih-Gee made to her bin before Courtney, knocking out the latter from the challenge. In the final round, Amanda had an early lead which Peih-Gee was never able to overcome. Amanda won individual immunity, which sealed Peih-Gee's fate.

In Survivor: Nicaragua, the castaways should race through a mudpit and into a haystack to find a ball & then use the ball to bounce off a shield and into a barrel. The first 4 to get their ball in their barrel move into the next round. Chase, Jane, Benry, and Holly all advanced to the next round. For the second round, they must use a stick to retrieve a key, which will unlock a chest containing four sandbags. The first 2 people to get all of their sandbags on top of a barrel move on to the final round. Chase and Benry was the first to compete the task and advanced to the final round. For the final round, both castaways will use a paddle to dig up 3 rope rings. Once they have all 3 rings, they will attempt to toss the rings onto a shield. First person to get all 3 rings on the shield wins reward. Chase won and chose Jane and Holly to join him to a private resort, including a shower, a meal, and a nice comfortable bed for a good night's sleep.

In Survivor: Redemption Island, the challenge was divided into three rounds. The first round was the castaways had to dig for a club, untie it and smash a tile. The first six advanced to round two. Grant, Boston Rob, Ralph, Mike, David, and Julie all moved on to the next round. The second round, the castaways had to get water from a trough, using their mouths. Then crawl under the and spit it out in a container. First person to fill the container to the line advances to the final. Grant and Mike were the first two to finish. Boston Rob came close but David beat him out. In the final round, the castaways had to solve a smaller version of the puzzle from the first challenge. Grant and Mike were neck and neck, but Grant beat out Mike for immunity.

In Survivor: One World, the challenge was for immunity. Troyzan brought an advantage at the Survivor Auction, which allowed him to skip to the next round. In the first round, the contestants must untie a large knot to release a ring The first four would go to the next round. Tarzan, Kim, and Christina finished first and advanced to the next round with Troyzan. In the second round, the castaways run up some come crates and they would bounce coconuts off of a net to burst a target. The first two to burst all three move to the final round. Troyzan was the first to do so, and Tarzan barely beat out Kim for the slot in the final round. The final round consisted of hitting three targets in a row. Troyzan was the first to complete the challenge and won immunity.

The challenge in The Australian Outback.

The challenge's use in Africa.

The challenge in Marquesas.

Clay and Helen compete in Thailand.

Matthew winning the challenge in The Amazon. 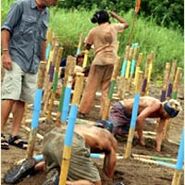 The challenge in Pearl Islands.

Rob M. and Amber at the challenge in All-Stars.

The course overview in Vanuatu. 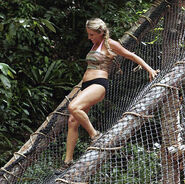 Katie in the first round of the challenge in Palau.

The castaways about to start in Panama.

Amanda and Peih-Gee compete in China.

Mike in the final round of the challenge in Redemption Island.

Leif in the first round in One World.