The Survivor Auction is a special Reward Challenge where the players are temporarily relieved from competing in strenuous challenges. Instead, they will be given a specific sum of money where they must outbid the other contestants for certain items, mostly food, with instances where a temporary use of amenities or a visit from loved ones are also offered. There are also instances where there are game-changing powers that contestants can outbid on, such as the power to send another player to Exile Island, an advantage at the next Immunity Challenge, or a clue to a Hidden Immunity Idol. The host would pound a gavel on the auction table, denoting that the item has already been sold.

At pre-determined points, the host will offer covered items which will remain covered until there is a winning bidder. In connection to covered items, there are also "trap items," which reveal an undesirable prize, such as exotic food items or boiled water from their camp. Also, the host will sometimes tempt the contestant to trade his/her chosen item for another sealed item, which sometimes reveal a "better" item(s), or sometimes a more undesirable one(s).

In recent seasons, players are to outbid on items that would benefit the entire tribe, such as all-tribe food items to be eaten in a certain amount of time, or extra food supply. This could serve as doing a favor for the tribe, in order to establish a better position in the game, perhaps expecting their tribe to return the favor.

Prior to the auction starting, the host announces the guidelines of the auction. In order for a contestant to bid, they must adhere to the following rules:

The auction is well received by fans, primarily with seeing the contestants enjoying food and sharing it with their tribemates or keeping it for themselves. It also provides insight as to whether or not a castaway will risk what they have bought in order for a concealed item, which is typically exotic local cuisine or an improvement on what has been won. Also, hogging too many items from the auction may receive the ire of his or her tribemates.

Host Jeff Probst himself acknowledged that the Survivor Auction lost its appeal due to the increasingly cutthroat nature of the game, as contestants no longer competed for food and instead held on to their money until game advantages were up for bid. This was apparent in the most recent instances of the Survivor Auction, Cagayan and Worlds Apart.[3] 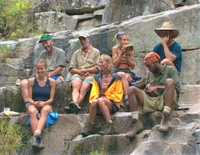 Barramundi at the auction in The Australian Outback. 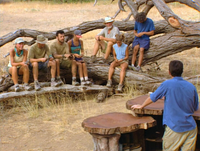 Moto Maji at the auction in Africa.

The tribes at the auction in Thailand. 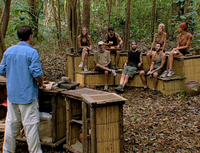 Jacaré at the auction in The Amazon. 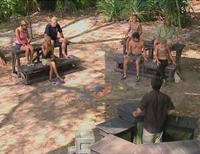 Koror at the auction in Palau.

Xhakúm at the auction in Guatemala.

Aitutonga at the auction in Cook Islands.

Dabu at the auction in Micronesia.

Nobag at the auction in Gabon.

Forza at the auction in Tocantins.

Aiga at the auction of Samoa.

Tikiano at the auction in One World.

Dangrayne at the auction in Philippines.

Enil Edam at the auction in Caramoan.

Solarrion at the auction in Cagayan.

Merica at the auction in Worlds Apart.