Borneo
Marquesas
Guatemala
South Pacific
Squared Off (also known as Turtle Roll, Watch Your Step, and Flip Out) is a recurring individual challenge that originated in Survivor: Borneo. It has since been used in Marquesas, Guatemala, and South Pacific. The challenge requires puzzle solving and analytical strategy.

Each contestant starts the challenge at the edge of a gameboard comprised of several six-sided tiles (or in its debut season, a grid of square tiles). One at a time, contestants will take one step onto a new tile (turning it over to show a designated color). Contestants are not allowed to step onto a space that has already been used. When a castaway has no more legal moves, they are eliminated from the challenge. Last person standing wins.

The challenge was first seen in Survivor: Borneo for immunity, with contestants competing on a 10x10 square grid. Rudy Boesch outlasted his closest competitor Sean Kenniff to win the challenge, and immunity.

When the challenge reappeared in Survivor: Marquesas, it was used as the loved ones reward, with the contestant's loved ones actually competing in the challenge. The challenge introduced the tiered hexagonal gameboard that has been used in all subsequent uses of this challenge. Additional rules included four tiles were marked with "Skip a Turn" (the loved one who flipped over the tile loses their next turn) and one tile marked "Vote Someone Out" (allowing the loved one to eliminate a rival from the challenge). Furthermore, contestants were only permitted to communicate non-verbally with their loved ones. Ultimately, Kathy Vavrick-O'Brien won the challenge when her son Patrick outlasted the remaining loved ones.

In Survivor: Guatemala, the challenge was used for individual immunity. Danni Boatwright purchased a Challenge Advantage at the Survivor Auction, which allowed her to switch positions with another contestant at any stage of the challenge. She used the advantage in the last leg of the game to swap places with Stephenie LaGrossa, allowing Danni to win immunity.

Survivor: South Pacific saw the challenge appear again for individual immunity. Early on, Brandon Hantz made moves to eliminate Edna Ma, the target for the next vote, from the challenge instead of winning himself. His attempt to be coy about this strategy angered Edna, but it worked, and allowed Coach Wade to win the challenge, and immunity, by a wide margin. 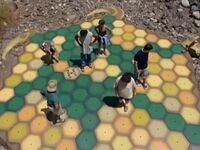 The loved ones compete in Marquesas.