Soliantu is the merged tribe of Survivor: Marquesas. Their tribe color is magenta.

The Tribe at its' first challenge.

The Tribe at it's second Immunity Challenge

The Final Four compete for Immunity at Tribal Council. 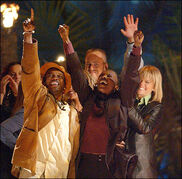 Vecepia is the Sole Survivor of Survivor: Marquesas.

Retrieved from "https://survivor.fandom.com/wiki/Soliantu?oldid=351330"
Community content is available under CC-BY-SA unless otherwise noted.