A first class municipality in Cagayan

Merged with Aparri on Day 18

Solana is a tribe from Survivor: Cagayan.

Entering the game on a speedboat, the "Beauty" tribe of Solana was initially seen as the potentially worst of the three tribes, being perceived as a tribe only relying on their looks, and "cannot be connected with success", as tribe member Alexis Maxwell put it.[1]

After selecting LJ McKanas as their Tribe Leader, LJ was put into a position where he had to select who he perceived as the tribe's weakest member, which he chose Morgan. However, Morgan was not out of the game. Instead, she was flown by a helicopter to her camp, while her tribemates trekked their way to it. Once she arrived at camp, the ex-NFL cheerleader was given a choice between improving her impression by taking an extra sack of rice, or take a clue to the Hidden Immunity Idol. Morgan chose to get the idol clue instead, and searched in and out of the large rock formation right next to their beach. When Morgan saw her tribemates arriving at camp while she was looking, she covered her tracks by saying that she took the existing rice and fishing gear (in actuality, both items were default to all three tribes) over the idol clue. While hoping Morgan did not take her being singled out early on as a negative, LJ believed Morgan already had either a clue to the idol, or the actual idol itself.

The tribe went on becoming the first of the three tribes to have fire without the aid of a flint, a feat only few Survivor tribes were successful. They placed first and then second during the first two Reward/Immunity Challenges.

While the rest of the tribe huddles near the camp, LJ finds the Solana Hidden Immunity Idol. LJ starts to be irritated with the females standing around especially Jefra.  The Beauty were battling for first at the puzzle phrase, but soon gives up the lead and loses the challenge.  Jeremiah turns out to potentially be the swing vote between the alliance of LJ, Alexis, and Jefra and the alliance of Morgan and Brice.  The majority alliance decides to split the vote between Morgan and Brice with the minority wanting Alexis out.  At Tribal Council, Jeremiah sticks to the majority's plan and votes as instructed, for Morgan, who he had flirted with at the beginning of the game.  A 2-2-2 tie occurs between Brice, Alexis, and Morgan, and Brice is subsequently voted off in a 3-0-0 re-vote.

During the moments after arriving back at camp, Morgan gets Jeremiah to talk about his possible siding with the minority alliance.  Beauty tribe is able to place 1st easily in the Reward Challenge and also then in the Immunity Challenge.

On Day 12,[2] the tribal divisions of Brawn, Brains, and Beauty were disbanded. Cliff Robinson, Lindsey Ogle, Tony Vlachos, Trish Hegarty, and Woo Hwang came over from the Brawn tribe joining Jefra and LJ as the New Solana tribe. The newly formed tribe won reward in huge part because Cliff on the post while their opponent had two women trying to hang on to the posts.  While the former Beauty on Aparri gossip, the two Beauty are able to see the dissent in the five Brawn members that switched to Solana. Tony wants LJ out with Cliff, Lindsey, and Woo also wanting LJ out. LJ, Jefra, and Trish are targeting Cliff.  Trish talks to Tony about flipping and voting out Cliff and is successful when Cliff is voted off 4-3.

When the tribe gets back from an alliance-shifting Tribal Council, Trish and Lindsey get into a disagreement which results in Lindsey pulling herself out of the game because she fears she might get violent. At the Reward Challenge, most of the tribe is thrilled about Lindsey's departure either on a game level or both personal and strategic levels. They win another Reward Challenge mainly due to mismatches with their opponents on the other tribe. Tony and Woo were selected to raid the New Aparri camp, and later the tribe won immunity, avoiding another potential chaotic Tribal Council.

On Day 18, the tribe members were notified by Tree Mail that they should bring their things from the camp to the rowboat that would come to the beach, as the tribes would merge to the Aparri camp.[3]

Solana at the marooning.

Solana in their first challenge.

Solana's reaction to the hens at a Reward Challenge.

The new Solana tribe after the tribe switch. 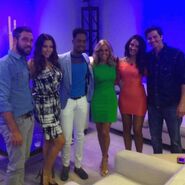 The Solana tribe reunited during the reunion.
Add a photo to this gallery

Retrieved from "https://survivor.fandom.com/wiki/Solana?oldid=585204"
Community content is available under CC-BY-SA unless otherwise noted.