A given number of tribe-members must swim out to a platform and climb up to a high platform. They take a club and jump out over the water, attempting to smash a tile which holds a key. Upon retrieving the key, they return to shore and the next contestant begins the circuit. Once all keys have been retrieved, the remaining tribemates use the keys to unlock a box and complete the final phase of the challenge: either a puzzle or a carnival throwing-game.

The challenge debuted in Survivor: Cook Islands as a Reward Challenge. Three tribe members retrieved six keys (each was contestant required to collect at least one key each), whilst the remaining two solved the final puzzle depicting a map of the world. Aitutaki won the challenge, receiving items they had selected from a catalogue (bread, potatoes, and peanut butter).

The same format was used in Survivor: Micronesia, although the challenge was a combined Reward/Immunity Challenge. Five tribe-mates retrieved one key each, one person unlocked the chest, and the remaining three contestants solved the puzzle (a map of Micronesia). Malakal won the challenge, gaining immunity, fishing supplies, and a bamboo boat.

In Survivor: Redemption Island, the last phase was changed to a carnival game and the challenge was renamed Smash, Grab, Smash. Five contestants retrieved keys, one unlocked the chest, whilst the remaining two used balls contained in the chest to smash five tiles. Zapatera won the challenge, gaining immunity and reward (fishing gear).

Survivor: Caramoan saw five castaways retrieving keys and the remaining two unlocking the chest and using the sandbags contained within to knock over a row of stacked blocks. Bikal won the challenge, and immunity.

In Survivor: Millennials vs. Gen X, the contestants had to swim out one by one to a netted ramp, jump off to grab one of five keys, and use them to unlock a crate containing diving goggles. Using those, contestants must take turns diving into the water to untie and retrieve five rings. After the rings are collected, they must be tossed around five poles to win immunity. Takali initially fell behind after David Wright's poor performance retrieving his key. However, they were able to catch up on the ring tossing segment to win against Vanua. 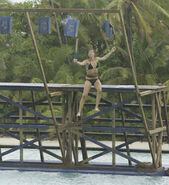 Alexis smashes her tile in Micronesia.

Ozzy competing for Malakal in Micronesia.

Ami obliterates her tile in Micronesia.

Sarita leaps off the platform in Redemption Island.

Matt leaps off the platform (Caramoan).

Julia competes for Gota in Caramoan.

Brenda competes for Bikal in Caramoan.

Michael competing for Gota in Caramoan. 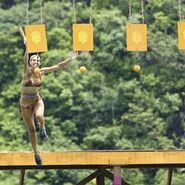 Sherri competing for Gota in Caramoan.