The castaways' feet are tied together and their arms are bound to their sides. One at a time they must slither through the sand through a series of obstacles before completing a final objective.

In Millennials vs. Gen X and Island of the Idols, the team had to complete a puzzle at the end of the course, while in Heroes vs. Healers vs. Hustlers the unbound tribe member had to shoot five balls into a receptacle before completing the challenge.

In Millennials vs. Gen X, David Wright drew the white rock and did not have to compete, automatically earning a spot on the reward. Although the team of Jay Starrett, Ken McNickle, and Will Wahl got off to an early lead, the team of Adam Klein, Hannah Shapiro, and Jessica Lewis and the team of Bret LaBelle, Sunday Burquest, and Zeke Smith both caught up at the puzzle portion, with Bret, Sunday, and Zeke finishing first, joining David on the reward.

The challenge returned in Heroes vs. Healers vs. Hustlers, this time with the additional task of pushing balls with their heads. Levu got off to a strong start with Desi Williams, and continued on to Ashley Nolan and Joe Mena's laps. Soko and Yawa struggled, especially Yawa's Mike Zahalsky and Soko's Ryan Ulrich, who both had trouble getting over their hills. With Levu's lead, Devon Pinto managed to toss five balls into the receptacle, winning for his tribe. Cole Medders managed to finish his hoops before Soko even finished the slithering portion due to Ryan's struggle, also winning reward for Yawa.

The challenge was used immediately after the Tribe Switch in Island of the Idols where three pairs were tethered together on each tribe and had to slither together to make it across the finish line. Then, the final, untethered, pair had to solve a fire-shaped puzzle. Vokai got off to an early lead after various members of Lairo struggled in the sand, allowing them to easily win reward. 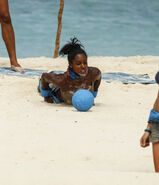 Desi competes in Heroes vs. Healers vs. Hustlers.

Ryan competes in Heroes vs. Healers vs. Hustlers.

Tommy competes in Island of the Idols.

Vokai competes in Island of the Idols.