Borneo
The Australian Outback
Pearl Islands
Tocantins
South Pacific
Water Torture (also known as Shoulder the Load) is a recurring endurance challenge that originated in Survivor: Borneo and was modified and reused in later seasons.

In Borneo, one man from each tribe would hold weight on poles until they could no longer do so. Due to the challenge going unaired, it currently unknown if the polebearers had to simply hold a set weight for as long as they could or if their was a method for increasing the weight of the poles similar to later seasons.

When used in The Australian Outback, one man from each tribe was chosen to be the designated water bearer who would hold weight in water from the other tribe until the weight became too much to bear.

Starting in Pearl Islands and since, three members from each tribe will have a pole across their shoulders. Each round, weight (20 lbs.) will be added to that pole. The decision about which tribe member gets the weight will be made by the other tribe. When the weight becomes too much to bear, the tribe member will drop the pole and be out of the challenge. Last person left standing wins reward or immunity for their tribe.

This challenge would first appear as an unaired Reward Challenge in Survivor: Borneo that occurred on either Day 4 or 5. Richard Hatch and Joel Klug bore the poles for Tagi and Pagong respectively. Joel managed to endure longer than Richard, earning the Pagong tribe a map to a closer water source.

In its on-screen debut during Survivor: The Australian Outback, Michael and Colby were the two designated water bearers. After time elapsed they were both carrying approximately 400 lbs. of water, where soon Michael's pole snapped in half. The two went into a timed tiebreaker in which Colby won for his tribe, Ogakor.

Andrew and Ryan O. won this challenge for Morgan when it reappeared in Survivor: Pearl Islands.

Taj won this challenge for Jalapao for reward in Survivor: Tocantins.

Dawn won this challenge for Savaii most recently in Survivor: South Pacific, where the challenge was for reward and immunity.

Colby at the challenge in The Australian Outback.

Joe holds the weight for Jalapao in Tocantins. 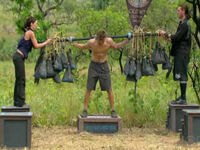 Brendan in the challenge in Tocantins.

Dawn wins the challenge for Savaii (South Pacific).
Add a photo to this gallery

Retrieved from "https://survivor.fandom.com/wiki/Shoulder_the_Load?oldid=579972"
Community content is available under CC-BY-SA unless otherwise noted.