The challenge made its debut in Survivor: Palau. The castaways would race to salvage sake bottles from a shipwreck. One at a time, the castaways would be pulled to the shipwreck on a raft by their tribemates. Once the player arrived, they must dive down to retrieve a sake bottle. The first tribe to bring back six sake bottles wins. Though Ulong had an early lead, Ibrehem had difficulty staying underwater long enough to get a bottle, thus giving another win for Koror. Despite winning, Koror still had to attend Tribal Council to vote out somebody before they could enjoy their reward of beefstew and rootbeer and watch the losing tribe's Tribal Council.

In Survivor: China, Amanda and Courtney sat out for Fei Long. In this version, two castaways are releasing puzzle pieces that refer to the Chinese Zodiac. Then the remaining three would solve the puzzle. Also, the divers must alternate each time. For the first half of the challenge, Fei Long and Zhan Hu were relatively even. However, Peih-Gee and Jaime threw the challenge in order to vote out one of the newcomers of the tribe. This allowed Fei Long an easy victory.

The challenge was reused and modified in Survivor: Caramoan. In this variation, the divers were not required to alternate. In this case, three castaways would dive to remove bamboo sticks. They would release one of nine rings. Once all nine rings are obtained, they would be pulled back by three other members. Then, the remaining members would toss the rings on to three post. The first tribe to do so wins immunity and fishing gear. Laura sat out for the Fans. The Fans fell behind early because they sent weaker members and Sherri didn't switch out early. The Favorites sent athletic members, who alternated each turn. This allowed them to gain an early lead. Despite the Fans' best efforts, Malcolm and Phillip won the challenge for the favorites.

The challenge appeared for a fourth time in Survivor: Game Changers. Nuku started with an early lead due to Ozzy's strength in swimming. They managed to get all of their buoys as Brad struggled for Mana, ultimately switching out with Aubry, who managed to make up time. The two tribes were equalized at the puzzle stage, with both tribes at a loss as to what word was to be spelled out. Eventually Hali came up with the idea of "Metamorphosis", and Mana hurriedly put the word together to win immunity. 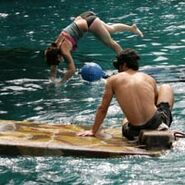 Angie and Gregg competing in Palau.

The overview of the course in China.

The overview of the course in Caramoan.

Andrea, Brenda, and Erik at the challenge in Caramoan.

Michaela helping to solve the puzzle for Mana (Game Changers).