Merged with Upolu on Day 19

Savaii is a starting tribe from Survivor: South Pacific.

The tribe was comprised of eight new players who were joined by veteran player Ozzy Lusth, who was known for his impressive physical ability. Savaii is known for their happier tribe dynamics, but the merge sent them on a downward spiral to extinction after one castaway felt like an outcast to them. Their tribe color is red.

Savaii was initially the happier of the two tribes, receiving a proven challenge beast in Ozzy Lusth to bolster an already young and athletic tribe. John Cochran immediately stood out as the odd one out due to his nerdiness, while Semhar Tadesse and Ozzy became close. However, when Semhar blew the Immunity Challenge and annoyed Jim Rice, this threatened to send her home over the initial outsider Cochran. Ozzy campaigned to keep Semhar, but it ultimately proved futile as the majority sent her to Redemption Island.

After Semhar's departure, Jim established a core alliance with Keith Tollefson and Ozzy and pulled in Whitney Duncan and Elyse Umemoto to make a majority of five, alienating the weaker and/or older players in Dawn Meehan, Cochran, and Mark Caruso. However, this would eventually unsettle Jim as he became the fifth wheel between two couples. This alliance would only stay intact long enough to vote out Mark. From that point, Jim made it his mission to split up Ozzy and Elyse. He recruited outsiders Cochran and Dawn with ease, but Keith and Whitney were torn. They decided to vote out Dawn, thinking it would piss nobody off. However, Ozzy saw through those bluff votes and felt betrayed by everyone when Elyse was blindsided.

Upon returning from Tribal Council, Ozzy declared himself a free agent, which humored the rest of the tribe. Eventually, Ozzy tried to make amends but his tribemates knew it was because he had no other option. Alternating wins and losses meant Savaii and Upolu were tied 6-6 with a merge approaching and Christine Shields Markoski waiting in Redemption Island, so this was a must-win challenge for Savaii. Unfortunately, a poor performance from Cochran cost them immunity. Ozzy hosted an open forum which essentially confirmed Cochran would be the next to go. The next day however, Ozzy thought it would be best for everyone to vote himself out so that he could knock Christine out of Redemption Island, pretend to be betrayed, and potentially gain an advantage come the merge. Jim and Keith were not convinced that the reward outweighed the risk, but Cochran of course was all for it since it meant he would be saved yet again. Ozzy gave Cochran the Hidden Immunity Idol for safekeeping as his tribe went through with the plan. Ozzy carried it forward at Redemption Island. Though Upolu was not convinced, he did succeed in re-entering the game over Christine.

With both Dawn and Ozzy winning immunity at the merge vote and Ozzy possessing the idol, Savaii looked like the odds were in their favor going into a 6-6 tie. However, Cochran flipped against the Savaii tribe, voting out Keith. Every other member would follow, including Cochran at the final seven. Ozzy would defeat each of his original tribemates at Redemption Island and win his way to Day 38, where he would eventually lose the Immunity Challenge to Sophie Clarke and be voted out for good. All of the loyal Savaii jury members voted for Sophie to win the title of Sole Survivor.

Savaii's shot in the intro. 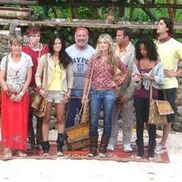 Savaii before Ozzy joined the tribe.

Ozzy competes in the first re-entrance duel.
Add a photo to this gallery

Retrieved from "https://survivor.fandom.com/wiki/Savaii?oldid=585823"
Community content is available under CC-BY-SA unless otherwise noted.