Merged with Boran on Day 20

Samburu is a tribe from Survivor: Africa.

Despite an early winning streak, Samburu was torn by two warring alliances defined by age, with the next four players voted out being original members of this tribe. From that point on, the rival Boran tribe had control of the game. Their tribe color is red.

The Samburu tribe started early on with two conflicting alliances. The elders (Linda, Teresa, Carl, and Frank) aligned themselves because of urgent necessity, for they accused the younger members (Silas, Kim P., Brandon, and Lindsey) of slacking at camp. The younger members even made friendship necklaces for each other and even went as far as preparing food only for themselves, brewing more tension between the two voting blocs. Adding insult to injury, all of their clay pots and jars (used for cooking and collecting water) became cracked and unusable. Despite the disunity and mishaps, the tribe rallied on to win the first three challenges.

Their apparent lack of unity eventually hurt them when the rival tribe Boran won an important Reward Challenge on Day 7, where they won a portable water tower good enough until the merge. The lack of clean water started to wear out the tribe's momentum, most notably Lindsey, who complained that her body had shut down, making her a target for the elder alliance. Their bad state then carried on to the Day 8 Immunity Challenge, where Boran won their first Immunity Challenge, thus sending Samburu to their first Tribal Council.

After losing their second successive Immunity Challenge, the younger members made a plea to the older members to continue on voting for Lindsey to at least keep the other members from having votes against them should they also end up in a deadlock in future Tribal Councils. But knowing that the young ones' audacious begging would not benefit them at all, the elders did not follow the younger alliance's plea when they distributed all three of their votes to Silas as a failsafe (should the elders be totally wiped out, the younger alliance will still be vulnerable in future Tribal Councils since two of them already have votes against them should a deadlock again come into place). But despite throwing a wrench in the younger alliance's future plans, one of the elders again took the fall as Linda was sent home by the majority alliance.

After Linda's departure, the younger members were about to celebrate their seemingly apparent victory over the elders. But when a strange Tree Mail asked them to send three of their members "on a quest", things started to turn on its head. Upon reading the mail, the younger alliance sent their alliance leader Silas and the two remaining Samburu elders (Frank and Teresa) with much hesitation. When they met host Jeff Probst, together with Boran's representatives Kelly, Tom, and Lex, everyone was in total shock when the host asked them to surrender their buffs in exchange for new, differently colored ones, signaling a tribe switch. Kelly, Tom, and Lex became the new members of Samburu while the other three were switched to Boran.

Upon reaching their new camp, the three new members were displeased of how cluttered and disorganized their new camp was. Tom and Lex complained about how murky their water hole was and tried to clean it (for it was their usual camp chore back at Boran), while Kelly was sneaking around camp, trying to unearth which among their new tribemates had votes. After winning the next Immunity Challenge (which resulted to Silas' subsequent elimination in Boran, thanks to Teresa and Frank, and much to Brandon, Kim P., and Lindsey's shock), the remnants of the younger alliance started to scramble with what to do next, even regretting their poor treatment towards the older members.

While being informed about the mechanics of the next Reward Challenge, Boran's Kim J. waved an "L" hand signal to Kelly, signaling that Lindsey had votes (again in large part to Teresa and Frank's continuing vendetta against the younger members for treating them poorly). Kim P. saw the incident and immediately told Lindsey about it. After Boran won Immunity, Kelly caught Kim P., Brandon, and Lindsey talking about Lindsey's past votes, thus affirming Kim J.'s information.

The three then again scrambled to save themselves from the upcoming vote, with Brandon even begging to the ex-Borans to vote for him to save Lindsey (even asking Kim P. and Lindsey to vote him as well to keep them in the competition). With the dilemma left unsolved, the vote ended up in a 3-3 split vote divided between old tribe lines. Lindsey's fears became a reality when the re-vote did not help her favor because she knew her four previous votes would be taken into account once again (since the person they voted for, Tom, or even Lex and Kelly did not have votes against them). Lindsey happily accepted her elimination. This caused a 6-4 voting advantage for the original Boran members when the merger happens.

On Day 20, the two competing tribes were merged into the Moto Maji tribe, and the remaining Samburu moved to Boran's old camp for the rest of the game. 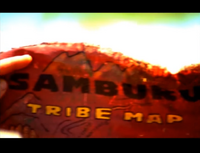 Samburu's shot in the intro. 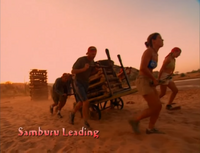 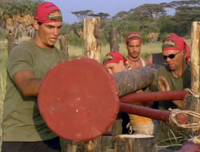 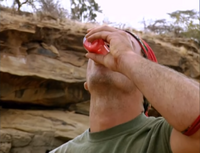 Samburu at the second Reward Challenge. 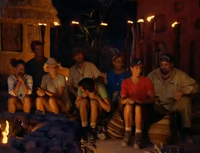 Samburu at their first Tribal Council. 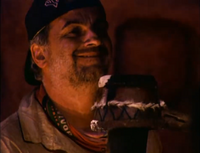 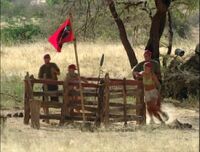 Samburu at the fourth Immunity Challenge. 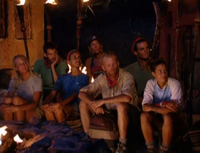 Samburu at their second Tribal Council. 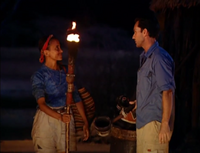 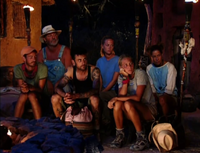 Samburu at their third Tribal Council. 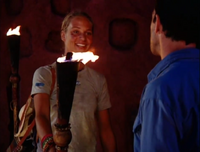