Merged with Asaga on Day 35

Samatau is a tribe from Australian Survivor (2017). Their tribe color is magenta.

A.K. quickly got himself into hot water due to playing aggressively right off the bat, and he was involved in a big scramble to find the Hidden Immunity Idol after spotting a clue which Adam picked up instead, but A.K. got to the idol first. Amongst the scramble, the target shifted to Adam after the tribe came across a pink thread in a spot where Adam claimed to be digging to find the idol without success, and as a result, became very suspicious of him. An idol was played at Tribal Council, but it was A.K. who played his idol on Jarrad, although it turned out that Jarrad received no votes and Adam went home in a 5-4-2-1 vote.

After the vote, Kate, Mark H. and Tessa found themselves in the minority of the tribe, and after losing the Day 9 Immunity Challenge, the rest of the tribe settled on voting out either Kate or Tessa next as they wanted to keep Mark for challenge strength. Kate was the one who ended up being sent home after Mark persuaded the rest of the tribe to keep Tessa for one more round. Knowing that she was next on the chopping block, Tessa attempted to sway over some members of the majority to no success and went about finding a Hidden Immunity Idol as a last resort. Mark ended up finding an idol and gave it to Tessa to save herself with, but the majority caught wind of this and decided to split the votes between Tessa and Mark. Tessa did play the idol, which cancelled six votes, but Mark ended up being blindsided as a result.

Now with Tessa all alone, her luck began to change as she was approached by lower-rung members of the majority alliance to form a new majority in order to take down Locky's inner circle. The new alliance, consisting of A.K., Jarrad, Peter, Tessa and Ziggy decided on blindsiding Aimee, and on Day 13 she was sent home in a 5-4 vote. When the tribe returned to camp, Tara furiously blasted A.K.'s alliance for their betrayal.

Samatau went to their next Tribal Council on Day 20, and A.K.'s alliance set their target on Tara for stubbornly isolating herself and being the weakest of Locky's alliance. Anneliese approached the majority claiming to "jump the sinking ship", but actually had no intention of doing so and instead attempted to flip Ziggy over to her side. This plan didn't work, as Tara was voted out on the revote (A.K.'s alliance split their votes), but in a surprise twist, the tribe were then informed of a second vote that would take place immediately. A.K.'s alliance each proceeded to loudly exclaim from the voting booth that they were voting for Anneliese because of her failed promise to work with them. But then, after Anneliese was voted out, it was revealed that it was a non-elimination vote, and both Anneliese and Tara would instead be joining Asaga.

On Day 21, Ben and Henry joined from Asaga. However, the tribe were wary of Henry's motivations for leaving his old tribe, as they saw him as having been in a power position over there. The addition of Henry in the tribe helped Samatau go on an immunity streak. On Day 26, Samatau won a Reward Challenge in which they would attend Tribal Council in order to vote for a member of the tribe to compete in the 'ultimate reward'. The tribe voted for Ziggy, and she was sent out on a task to find a special advantage in a swamp. She did find the advantage, and it gave her two powers: 1) A regular Hidden Immunity Idol, and 2) a Super Idol which gave her the power to nullify someone else's Hidden Immunity Idol.

On Day 27, both tribes were subject to another swap, with Samatau mostly staying intact with the exception of A.K. and Peter ending up on Asaga, Anneliese returning and Michelle joining. Samatau's immunity streak ended after losing the Day 30 Immunity Challenge and the tribe settled on Michelle going home as the main outsider. However, Michelle worked hard on shifting the target onto Ben by painting him as untrustworthy. This culminated in Michelle raking Ben over the coals at Tribal Council. Her persuasions paid off, as the tribe changed plans and sent Ben home.

Samatau then went on to win the next two Immunity Challenges, and on Day 32, they got to eavesdrop on Asaga's Tribal Council. In a surprise twist, there would be no vote but instead, Asaga were given the opportunity to mutiny to Samatau. Peter didn't hesitate in taking up the offer to return to his old tribe, increasing Samatau's numbers to eight.

Samatau attempts to unhook the bag of rice at the inaugural Reward Challenge.

Jarrad is hoisted up by his tribemates at the first Immunity Challenge.

Samatau just about wins the challenge.

Samatau constructing their tower at the third Immunity Challenge.

Samatau at their second Tribal Council.

Samatau competes against Asaga in the Surf Nuts Reward Challenge.

Mark H. is idoled out.

Samatau competes against Asaga at the Chain Reaction Immunity Challenge.

A.K. and Ziggy are the last two standing for Samatau.

Samatau competes against Asaga in the By the Numbers Reward Challenge.

Tara and Anneliese learn that Samatau's Tribal Council is non-elimination. 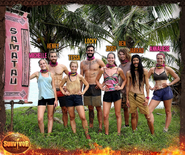 The Samatau tribe after the second tribe switch.