Survivor Wiki
Register
Don't have an account?
Sign In
Advertisement
in: Tribes, One World Tribes, Starting Tribes,
and 5 more

A surfing resort in Samoa

Merged with Manono on Night 17

Salani is a tribe from Survivor: One World.

Initially a much weaker side physically compared to their all-male rivals, the Salani women utilized the aspects of the One World twist to help them improve in camp life (at some points, by stealing) and by doing so, in challenges as well. Their tribe color is teal/blue.

Salani had an inauspicious start as a tribe. After revealing they are an all-female tribe, Salani, along with the rival all-male Manono tribe, were instructed to scour the truck they rode. Salani found themselves with only bunches of bananas and few bundles of coconut, as one Manono member stole the majority of the supplies they had gathered earlier, to their dismay. Carrying their meager supplies to their camp, Alicia immediately created a five-person alliance with Kat, Chelsea, Sabrina, and Kim. As they reached camp, Salani found their tribe flag, but they were confused to see the other tribe flag just a few meters away from theirs. After knowing they would live alongside the enemy, Salani tried to convince Manono to work together as a single unit, bartering their caught chickens for supplies and fire, but to no avail. While the other Manono members abstained themselves from the women, their resident gay member, Colton bonded with the women more than he did with his own tribe, stating that he had more in common with the women. This convinced Sabrina to give him the Manono-exclusive Hidden Immunity Idol she found. That night, desperate for fire, Salani stole an ember from Manono's bonfire. Their fire was short-lived because it went out overnight.

The next morning, Alicia and Christina went again to Manono's side of the beach in another attempt to convince the men to help them create fire. Alicia made a futile attempt to seduce the men, while Christina was successful when she proposed that the women would make frond roofs for the men in exchange for fire. Angered by her ineffective attempt, Alicia showed animosity towards Christina. At the first Immunity Challenge, Salani held its own against Manono, but Kourtney had accidentally broken her wrist, which required her to temporarily leave the competition for a check-up. Host Jeff Probst let Manono decide if they want to continue the challenge even with Salani was one member down as a sign of goodwill, or just take the win by default, since the challenge required all nine members competing. Much to Salani's chagrin, Manono chose to send them to Tribal Council. That afternoon, with Kourtney's game status still uncertain, Alicia campaigned for Christina's elimination. At Salani's first Tribal Council, Alicia and Christina clashed over the latter brokering a deal with the men. That night ended with Alicia's plan on hold, as Jeff revealed that Kourtney's wrist was heavily fractured and would need surgery and therapy, eliminating herself from the game. After Tribal Council, Alicia and Christina patched things up, but both still had reservations with each other.

The next day, Sabrina officiated a tribe meeting, stating that there is a need for organization, with the women agreeing and appointing her as their tribe leader. While Colton continued to frequent at the women's tribe shelter, they are convinced that Colton's cross-tribe visits had to be minimized, because they might give him enough information to use against them, as he was from the rival tribe nonetheless. At the second Reward Challenge, which offered a tarp, Salani almost won, but Manono still prevailed, breaking the all-women tribe's spirits further. Having a majority alliance early in the game caused communication improprieties that carried over at the second Immunity Challenge on Day 5, which required tribes to cross each other on a narrow balance beam—a challenge historically won by women. The mistrust between the majority alliance and the outsiders, combined with Kat's dismal performance, sent them to their second Tribal Council in a row. That afternoon, Kat was targeted for elimination due to her questionable athleticism, excuses, and immaturity, but it was Nina who was sent packing due to not being a member of the majority alliance, despite her strength, even though she was the oldest member of the tribe.

After Tribal Council, anticipating a terrible storm, Manono offered Salani to temporarily move to their shelter, but the women insisted they will only move if their shelter gave way. But with the torrential downpour lasted until the next morning, which left Salani cold and sleepless. A member of Manono, Troyzan, offered the women to warm up at the men's shelter. In a memory-based Reward Challenge, Salani destroyed Manono by winning their first challenge in a 5-0 blowout, earning themselves a canoe and fishing supplies. After the challenge, the Salani members were still unable to reignite their fire, despite borrowing an ember earlier that day. They returned to Manono to ask for another, but the men wanted to borrow their canoe some time, a compromise where Salani was reluctant for, furthering the conflict between the warring tribes. The next morning, Salani had put their fishing supplies to good use, having small, but decent catches. Manono even admitted they were impressed by Salani's improving self-reliance. At the Day 8 Immunity Challenge, the women initially lagged behind Manono, but closed the gap at the puzzle building stage of the challenge. Though the men accused the women of copying their almost-finished puzzle, the women won immunity anyway, sending the men to Tribal Council.

Seeing that the women started to become self-sufficient, the men found themselves now as the borrowers, asking the women to let them borrow their canoe and give them half of the catch, but the offer was rebuffed. Salani continued to prosper after winning the next Reward Challenge, which won them their own tarp; but their momentum was lost during the Day 11 Immunity Challenge. The women lost miserably, even their habitual cheating by copying the other tribe's completed puzzle did not help them. However, luck was still on Salani's side, as turmoil in the Manono tribe caused the latter giving up their immunity to the former. With no hesitation, the women accepted immunity, while the men sent themselves to Tribal Council, which would even out the playing field between the men and the women.

A Tribe of "Greek Gods"

Awed by the men's sudden dysfunction, the seven women of Salani decided to stick together. However, this pact was short-lived after a surprise tribe switch. After a draw of tribe-colored eggs, Salani lost Christina, Monica, and Alicia, but gained most of the other tribe's more athletic members, Jay, Michael, and Troyzan, leaving the new Manono tribe at a strength disparity. Immediately after the switch, Salani won reward, which allowed them to stay at the One World campsite, forcing the new Manono tribe to relocate.

With their tribe being the sole inhabitant of the One World campsite, the new Salani tribe used its resources without the added layer of having another tribe at camp. While the mood was still festive, Jay took advantage of the men-women mix-up by forming an alliance with Kim, Chelsea, and Troyzan. With the all-women alliance and this newly forged alliance at their disposal, Kim and Chelsea now had better voting options. While the Manono idol in Colton's possession, the Salani idol has yet to surface. In Day 14, Kim ultimately found the idol, and disclosed it to Chelsea, securing more power for the both of them. The new Salani tribe prospered even further, winning the next two challenges due to their sheer strength.

On Day 17, both tribes were instructed to proceed to Tribal Council. Stunned by the uncommon event, Salani went to Tribal Council with Manono and noticed that the new Manono tribe was missing a member. Jeff Probst informed them about Colton's gastrointestinal problems, and his elimination from the game. The night concluded with Jeff announcing that all twelve remaining castaways will coexist once again, announcing a merge. After receiving their new buffs, the new tribe returned to the One World beach for the rest of their time in the game. 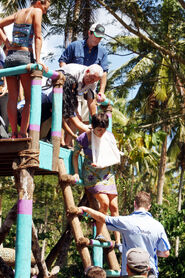 Salani celebrating a win at a challenge. 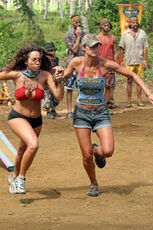 The new Salani after the tribe swap.