Castaways (one or two) are connected to a rope wound through a series of obstacles. The "sacrifices" would move throughout the course with the aid of their teammates. The first group to finish the course wins.

In Survivor: Vanuatu, the challenge appeared as the second post-merge Reward Challenge. The eight remaining contestants were split into two tribes of four. One person would be the "sacrifice", who was harnessed to a rope and had their hands tied. The other three contestants had to maneuver the harnessed contestant through a series of obstacles and to the finish line. The team of Ami Cusack, Chad Crittenden, Chris Daugherty, and Eliza Orlins beat the other four members of Alinta to win reward.

In Survivor: Cook Islands, the challenge appeared as a tribal Reward Challenge. This time two tribe members would be harnessed to a rope (but not with their hands tied). The remaining tribe members had to move them up and over an A-frame, under a thick log on the sand, around a long hitching post, and around a giant boxlike structure – to the end of the rope. At the end of the rope one tribe mate had to swim to a buoy and dive down to retrieve a decoder wheel. Using the wheel, the entire tribe had to work out a six-word phrase. The Aitutaki tribe beat Rarotonga to win pillows, blankets, and a hammock.

Eliza is a sacrifice in Vanuatu.

Leann, Scout, and Twila passing Julie through an obstacle (Vanuatu). 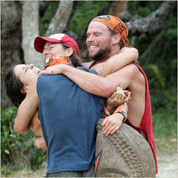 Ami, Chad, Chris, and Eliza win the challenge in Vanuatu.

Becky and Candice are the sacrifices for Aitutaki in Cook Islands.

Jenny is thrown through the course for Rarotonga (Cook Islands).
Add a photo to this gallery

Retrieved from "https://survivor.fandom.com/wiki/Sacrificial_Lamb?oldid=553389"
Community content is available under CC-BY-SA unless otherwise noted.