Isla Saboga, an inhabited island in the Pearl Islands

Absorbed by Chapera and Mogo Mogo on Day 13

Saboga is a tribe from Survivor: All-Stars.

Saboga is best remembered for being the most dysfunctional of the three starting tribes and having its members absorbed by the remaining tribes on Day 13, after which it ceased to exist. Their tribe color is yellow.

Saboga started the game as the most fractured of the three tribes, almost immediately dividing into three separate alliances. Rudy Boesch and Rupert Boneham were the first to join forces; Rudy knew that both men had a reputation of honesty and loyalty, so he approached Rupert to form a coalition. Jenna Lewis and Jerri Manthey bonded on their mutual distaste for the winners: Jenna was avidly against the idea of a former Sole Survivor winning twice, while Jerri was eager to vote off Tina, with whom she had had personality conflicts on their prior season. Finally, Ethan Zohn and Tina Wesson bonded out of a sense of necessity; as former winners, their backs were against the wall and they would be even weaker if left unaligned. In the event of a Tribal Council, it was becoming readily apparent that the Rudy-Rupert alliance would decide the outcome as the other duos targeted each other.

On Day 3, Saboga lost the first Immunity Challenge and became the first tribe to attend Tribal Council. After much lobbying from both sides, Rudy and Rupert eventually joined Jenna and Jerri. Tina was eliminated from the game in a 4-2 vote.

Ethan was now the obvious odd-man-out, and as such sought to make himself indispensable by catching fish. This led to a mild rivalry between the Africa winner and Rupert, the tribe's fisherman. Meanwhile, Saboga had a brief respite from its bad luck when it won the day four Reward Challenge and a gift of blankets. However, Saboga exchanged the blankets for a flint, cooking pot, and a clue to open the locked box that had been given to the tribes, containing rice. During the challenge, Rudy injured his ankle.

The tribe's winning streak was over as quickly as it had started, and Saboga lost the next Immunity Challenge. Despite Ethan being on the chopping block, the tribe instead chose to target Rudy, who had been ailing due to his injury. On Day 6, Rudy was eliminated from the game in a 3-2 vote.

Rupert took charge of the tribe when the next Reward Challenge tasked the tribes with building a shelter using a tool kit provided with Tree Mail. Rupert and Jerri clashed over the proposed idea—digging down into the sand and building a log cabin around the gap—but Jerri backed down and the tribe went ahead with the idea. The project was largely considered a failure, losing the challenge decisively and being completely destroyed during a subsequent tropical storm. The storm rocked the morale of the tribe—particularly Jerri, who found it difficult to recover. On day ten, the paltry tribe of four finally escaped from their losing streak, placing second at the subsequent Reward Challenge, and later finished first at the day twelve Immunity Challenge.

When the Day 13 Reward Challenge asked the castaways to build a bamboo raft, Rupert sought to redeem himself after the shelter fiasco by constructing a decent raft. Instead, Saboga lost for the final time: having lost the Reward Challenge, the Saboga tribe was dissolved. Ethan and Jerri joined Mogo Mogo, and Rupert and Jenna joined Chapera.

On Day 26, the newly merged Chaboga Mogo tribe (including former Saboga members Jenna and Rupert) returned to Saboga beach. They lived on the beach for the remainder of the game's duration. 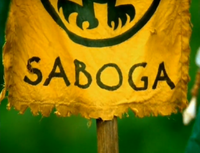 Saboga's shot in the intro. 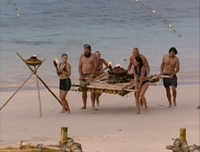 Saboga at their first Tribal Council. 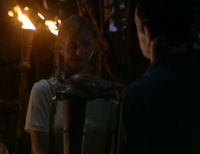 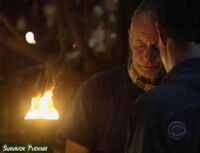 Saboga's final challenge before getting dissolved.

Saboga's members await to be picked by the other tribes.