Borneo
Africa
Marquesas
Palau
SOS Signal (also known as Distress Signal and S.O.S.) is a recurring tribal challenge. It plays on the "survival" theme of the show by requiring tribes to construct a signal at their camp to attract attention from the air. It is one of the few challenges where the winner is decided by an outside party.

Tribes must make a distress signal using any materials from the campsite. An airplane pilot will judge the signals. The tribe the pilot deemed with the most noticeable signal wins.

This challenge was first used in Survivor: Borneo, where it was known as SOS Signal. All castaways competed in the challenge. Pagong made a smiley face and everyone moved around to get attention. The Tagi signal said "SOS, Tagi is Groggy" and its castaways wore yellow jackets and moved in sync. The pilot viewed both signals as great, but Tagi's was more noticeable due to its castaways use of color and movement. Tagi won the challenge, winning themselves various comfort items, spices, and a knife.

The challenge was reused in Survivor: Africa, this time for immunity. At Samburu, Silas suggested to build a giant SOS signal, using the thorn bushes surrounding the camp. However, Lindsey got dehydrated and was unable to help. At Boran, the tribe decided to place it in a clearing. Kim J. used her luxury item (acrylic paint) to dye the mosquito nets. Everyone took their shirts off to make it more attractive, including Tom placing a feather between his buttocks. When the pilot flew over the Samburu camp, he noted that their signal was too close to the bushes, and blended with the background, deeming it unnoticeable. Boran on the other hand, was deemed very attention-grabbing because of use of bright colors and the correct terrain. The plane dropped the Immunity Idol over the Boran camp, giving them immunity.

The challenge was used again in Survivor: Marquesas for tribal immunity. A boat captain judged the distress signals, and the tribe that made the better signal would hear his boat's horn near the winning tribe's camp, suggesting the tribe's victory. Prior to the Immunity Challenge, Rotu lost their first Reward Challenge, which was for the right to loot items from the losing tribe's camp. The winning Maraamu tribe, took advantage of their privilege, and took as much items as they could. The reward proved very helpful for Maraamu, as they used their newly acquired items to maximum effect. They tore down their lifejackets and used their foam as costumes and flags. Paschal used his luxury item, the American flag as a winning addition. The Reward Challenge loss caused a heavy blow on the Rotu tribe, who struggled to make up a signal, as they only had black-colored tarps to use. The paltry Maraamu tribe won the challenge.

This challenge was most recently used in Survivor: Palau (here called S.O.S.) as an Immunity Challenge. Due to Ulong only having three members left, Koror had to chose only three members to participate. Koror chose Katie for creativity, Caryn for work ethic, and Gregg for strength. Ulong dismantled their shelter to built the SOS signal, which was their tribe name "ULONG". The pilot noted how big the signal was, but because it was near the forest, it is was not visible when it was flown directly over. Koror took the challenge comically but seriously by spelling out "Got Food?" and made a big arrow pointing to it. They tried to spark a massive bonfire, but failed to due so by time of judging. Despite that, the pilot deemed Koror's better because it was on the beach itself and visible to all. Koror won the reward in the form of canned goods, wine, and fishing gear.

Pagong trying to get attention in Borneo. 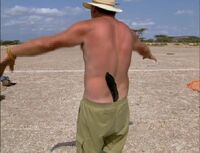 Big Tom during the challenge in Africa. 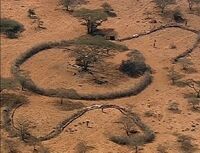 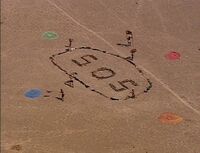 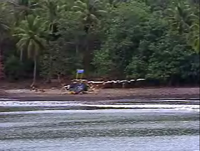 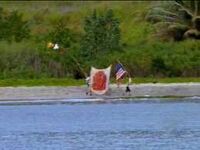 Maraamu's distress signal in Marquesas.
Add a photo to this gallery

Retrieved from "https://survivor.fandom.com/wiki/SOS_Signal?oldid=584146"
Community content is available under CC-BY-SA unless otherwise noted.