Samoa
Heroes vs. Villains
David vs. Goliath
Roll With It (also known as Blind Barrow) is a recurring challenge in Survivor. It is most remembered as the first challenge to ever be abandoned, due to an evacuation during the challenge.

In David vs. Goliath, the guides rode on a driving wheel instead of being strapped in a spherical cage.

The challenge first appeared in Samoa prior to a scheduled Double Tribal Council. Liz Kim for Foa Foa and Laura Morett for Galu were strapped in the spherical cage. Foa Foa took the lead heading into the table maze. However, when Russell Swan of Galu passed out during the final leg of the competition and was medically evacuated from the game, the challenge was ceased. This was the first time a challenge was canceled after it had started with no winner declared.

The challenge reappeared in the next season, Heroes vs. Villains. Tom Westman for the Heroes and Rob Mariano for the Villains were inside the spherical cage. The two tribes were even throughout the course, with the Villains narrowly finishing ahead to became the first winners of the challenge, sending the Heroes to their third Tribal Council.

The challenge reappeared in David vs. Goliath after a Tribe Switch. Instead of a spherical cage, the caller, Angelina Keeley for Jabeni, Gabby Pascuzzi for Tiva, and Kara Kay for Vuku, would instead ride on a driving wheel and have to retrieve a ball, which would be used to complete the table maze. Tiva maintained a lead throughout the challenge and easily finished first. Meanwhile, Jabeni initially fell behind on the obstacle course. However, they were able to catch up when Vuku dropped their ball in the table maze, allowing Jabeni to finish second and sending Vuku to Tribal Council.

Russell S. collapses during the challenge in Samoa. 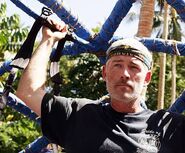 Tom leads the Heroes in Heroes vs. Villains.

Rob leads the Villains in Heroes vs. Villains.