Merged with Moto on Day 22

Ravu​ is a tribe from Survivor: Fiji.

While the rival Moto tribe was supplied with luxuries such as a sofa and cutlery for winning the inaugural Immunity Challenge, Ravu was forced to live in destitution. The tribe lost every single Immunity Challenge and won only one Reward Challenge. Despite this, four original Ravu members made it to the merge, with one, Earl Cole, going on to win the game. Ravu's existence was prolonged by a Tribe Switch occurring at the final 13, which would effectively add an extra member to the tribe. Their tribe color is orange.

On Day 3, Sylvia Kwan, who led the initial group of 19 castaways in building a luxurious shelter, was asked to divide the remaining 18 castaways into two tribes. The newly divided tribes competed for the right to live at a camp stacked with amenities, the luxurious shelter, silverware, a sofa, and other luxuries uncommon to the game of Survivor. The tribe Moto won the first Immunity Challenge and secured their place at the camp of luxury, while Ravu was sent to live in hardship.

Another condition of the previous day's challenge was that Sylvia would be sent to Exile Island and replace whomever was voted out of the losing tribe. On Day 4, Sylvia joined the Ravu tribe to open arms—particularly from Yau-Man Chan, who frisked her for the Hidden Immunity Idol. Sylvia's personality grated on her tribemates, already lethargic and famished from lack of food and water. Erica found a grove of wild pineapples, but the group still needed more nourishment.

When Ravu lost the second Immunity Challenge on Day 6 and Moto sent Earl Cole to Exile Island, the group seemed set on voting out Sylvia. Unfortunately for Erica, Mookie Lee placed responsibility on her panicking during the challenge, and convinced the rest of the tribe to vote her out instead. In spite of protests from Anthony Robinson, who would join Erica in voting for Sylvia, Erica was eliminated 6-2 on Night 6, with the still-exiled Earl unable to vote.

Due to their lack of challenge wins, the Ravu tribe had still not earned a flint, and was consequently still starving and dehydrated. That changed on Day 7, when Michelle Yi used a pair of Yau-Man's spectacles to start a fire. The result of this was that host Jeff Probst awarded them with a flint at the next Reward Challenge. It would be a small consolation; Ravu lost yet again, sending Sylvia back to Exile Island.

Ravu would also lose the subsequent Immunity Challenge, due in part to a poor performance from Anthony. Rocky was quick to latch onto the fact, berating the witness locator for faltering. Sylvia, meanwhile, covertly continued her search for the Hidden Immunity Idol. In order to ensure that the evening's vote did not backfire, Ravu engineered a Split Vote plan: four members voted for Sylvia, three voted for Anthony, and Rita cast her vote for Earl in order to prevent a tie. This way, even if Sylvia had the idol, Anthony would go home instead. It would prove much ceremony over nothing. Sylvia did not have the Hidden Immunity Idol, and was eliminated.

After returning to camp, Rocky threw a tantrum, rebuking Anthony for his "unmanly" behavior. His foul mood was exacerbated even further by a loss at the next Reward Challenge, which sent Yau-Man to Exile Island. The group resolved to win the next Immunity Challenge, but failed. However, a message in a bottle twist saved them when the victorious Moto tribe reluctantly gave the Immunity Idol to Ravu in order to keep the luxury camp. With the elimination of Liliana Gomez and the recent medical evacuation of Gary Stritesky, the tribes were now even at seven members each—despite Moto having never lost a challenge.

By Day 12, Earl and Yau-Man—the only remaining people in the game who had been to Exile Island—began to work together in order to unearth the Hidden Immunity Idol. Earl took the tribe on a hunting expedition, while Yau-Man would stay behind at camp to search for the idol. Their search, for the time being, would prove fruitless. At the next Reward Challenge, a heated altercation between Rocky and Moto's Dreamz Herd would further the rivalry established on Night 2. Ravu lost yet again, and Moto took home their third set of fishing gear, along fish, additional rice, spices, and a king-size bed. Earl was sent to Exile Island for the second time.

With the women of the tribe depleted, Michelle and Rita relied on each other for companionship; this relationship annoyed Rocky, who became fed-up with their constant "girl talk". When Ravu lost a concentration Immunity Challenge in their nearest bid at victory yet, Rocky pushed the tribe to vote out its fourth woman in a row and Rita was eliminated 5-2.

On Day 15, a surprise Schoolyard Pick scrambled the tribes and resulted in the Ravu tribe being comprised entirely of men—including Dreamz and Rocky, long-time competitors. At the new Ravu, the tide quickly turned against Anthony, who isolated himself from the "burly men" of his tribe and was routinely preyed upon by Rocky; as Edgardo Rivera stated in a confessional, Anthony was Rocky's "little bitch". Anthony appealed to Dreamz to vote out Rocky instead, but after the all-male Ravu lost the next Immunity Challenge, his fate was sealed. Following an extremely uncomfortable Tribal Council in which Rocky publicly railed against Anthony, the witness locator was voted out unanimously.

Lisi Linares, who was not picked to join either tribe at the Tribe Switch, returned from Exile Island to join the tribe on Day 18. While the tribe of men viewed her entry with apprehension at first, she later took advantage of the tribe's victory at a Reward Challenge—the tribe's first win ever—to bond with the other men of the tribe. The copious amount of food eaten resulted in the group getting sick, for which Rocky mocked them endlessly. The move further alienated him from the rest of the tribe.

Ravu returned to form with an Immunity Challenge loss on Day 19, forcing them to consume yet another of their own. Due to Rocky's constant antagonizing, the men of the original Moto alliance pushed to keep Lisi around over him. The alliance between Lisi and her former tribemates was strengthened when she divulged to Alex Angarita the nature of her clues regarding the Hidden Immunity Idol. In the end, Rocky was blindsided in a 4-2 vote at Tribal Council, and became the first member of the jury.

The morning following Tribal Council, Alex, Edgardo, and Mookie opted to use Lisi's clues to look for the Hidden Immunity Idol to search while she and Dreamz slept nearby. Working quietly, Mookie unearthed the idol and pledged to share it with the Alex and Edgardo; in a confessional, however, he stated his intentions to keep the idol for himself. As he re-covered the land, however, Lisi woke up and discovered his fiddling, and became suspicious of his motives. In order to keep Lisi from discovering that the three now had the idol, Mookie later briefly dug for the idol with her.

Ravu lost the next Reward Challenge, sending a very distraught Lisi to Exile Island. When she returned and the group lost the next Immunity Challenge, Lisi's will began to waver. She approached Alex and Edgardo and asked to be voted out of the game. She would later change her mind, and ask to go through with the original vote against Dreamz. This perceived lack of drive to continue in the game brought Lisi under heavy fire at the next Tribal Council, and the customer service representative was voted out unanimously by the tribe for her emotional instability.

On Day 22, the remnants of the rival tribes paddled to Exile Island, where the two tribes merged to form the Bula Bula tribe. The new tribe then returned to the Moto beach.

Ravu's shot in the intro. 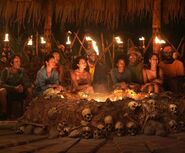 Ravu at their first Tribal Council. 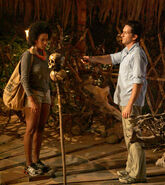 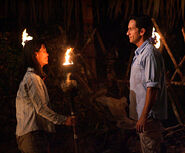 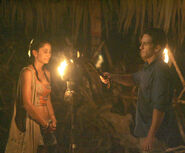 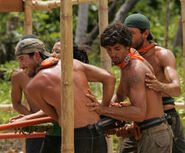 The new Ravu competes in the sixth Immunity Challenge, Crosswalk. 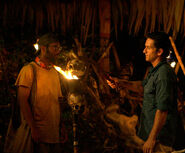 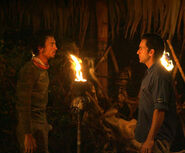 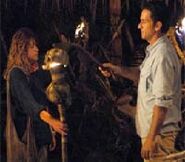 Lisi voted out.
Add a photo to this gallery

Retrieved from "https://survivor.fandom.com/wiki/Ravu?oldid=575667"
Community content is available under CC-BY-SA unless otherwise noted.