Merged with Aitutaki on Day 25

Rarotonga (informally known as "Raro") is a tribe from Survivor: Cook Islands.

Rarotonga was initially comprised entirely of Caucasian-Americans, following the racially divided tribes that season. On Day 7, the tribe was rearranged to reflect a more varied ethnic composition by combining the four tribes into two new ones. Manihiki and Puka Puka were disbanded and Rarotonga competed with its main rival Aitutaki for rest of the tribal phase. Though the disbanding tried to vary the ethnic composition, the tribe remained associated with its original race; by the time the tribes merged on Day 25, four of Rarotonga's five remaining members were white. Their tribe color is blue.

The members of Rarotonga started the game with some apprehension at being divided due to their race; as Parvati Shallow stated in a confessional, "is that kosher?" Jonathan Penner came under fire for taking a chicken from the Asian Puka Puka tribe; it would be the first incident in which other castaways professed to finding the 44-year-old producer untrustworthy, but not the last. Jessica Smith would later lose the chicken, resulting in a net loss for the tribe. After the first Immunity Challenge, the members of the losing Manihiki tribe then sent Jonathan to Exile Island, citing karma for his chicken snafu.

Rarotonga continued to win Immunity Challenges, and a romance blossomed between Adam Gentry and Candice Woodcock, the former of whom clashed with the rest of the tribe when it came to renovating the shelter. However, the young couple would be split on Day 7, when a Schoolyard Pick shuffled the tribes.

On Day 7, a Schoolyard Pick resulted in the four tribes being mixed into two, Aitutaki and Rarotonga.

At the Schoolyard Pick, the new Rarotonga tribe was comprised of the gender-based teams selected by Parvati and Brad Virata.

It quickly became apparent that the new iteration of Rarotonga was being run by the young jocks—Adam, J.P. Calderon, Nate Gonzalez, and Brad Virata. J.P., in particular, began to annoy the women of the tribe with his general bossiness. But after failing at a crucial Immunity Challenge, Stephannie Favor seemed to check out of the game and was slated as the next to go. When confronted with the choice between losing the strong but cocky J.P., or the kind but lagging Stephannie, the tide seemingly turned against the African-American nurse. It was then that Jenny Guzon-Bae orchestrated the women of the tribe against J.P., and apparently recruited Brad and Adam—who had been exiled following the previous Reward Challenge—to their cause. At Tribal Council, J.P. was voted out, 7-2. Nate was the lone hold-out.

Rarotonga emerged victorious at the next Reward Challenge, but faltered come the Immunity Challenge, and it seemed like a foregone conclusion that outsider Cristina would be booted. Unfortunately, Stephannie made a crucial error when she mentioned that she wouldn't mind going home for some "mashed potatoes and gravy" during a discussion with former Manihiki tribemate Nate. Nate quickly latched onto this and spread word around the camp that Stephannie had checked out of the game yet again, and that night at Tribal Council, Cristina was spared as Stephannie was unanimously voted out of the tribe.

On Day 15, the tribes were faced with a Reward Challenge followed by a Double Tribal Council. Aitutaki won the challenge and gained the right to abduct a member from Rarotonga following their own Tribal Council, as well as a feast and the right to sit in on the Rarotonga tribe's discussion. After eating, Aitutaki chose to bring Nate back to camp, and save him from the vote that night. Cristina was voted out, 4-2, with Brad joining the police officer in voting for Jenny.

On Day 16, Rarotonga faltered at a Reward Challenge when they assigned Rebecca Borman to run the swimming leg of a challenge. She failed spectacularly, losing her breath quickly and falling out of her top repeatedly. Nate returned to the tribe following the challenge and quickly pointed the finger at Brad, who had opted to complete the puzzle leg of the challenge instead, labeling the fashion director a "nancy boy." Other tribe members joined the shoe salesman against Brad, and he became the new tribe outcast. Fortunately for him, the tribe was victorious in the subsequent Immunity Challenge—due in large part, ironically, to their quick completion of a puzzle.

The game was shaken up on Day 19 when host Jeff Probst offered the castaways a chance to Mutiny and switch tribes. Candice and Jonathan, the former Rarotonga members remaining on the Aitutaki tribe after Jessica had been voted out at the previous night's Tribal Council, quickly seized upon the opportunity and returned to their original team. It quickly became apparent that Candice had switched to rejoin her friends Adam and Parvati, and Jonathan had merely been going along with the woman he erroneously believed to be his closest ally. Nonetheless, this move bred resentment among the remaining Aitutaki members, as the formerly even tribe had now been whittled down to only Ozzy, Becky Lee, Sundra Oakley, and Yul Kwon. When Aitutaki won the following Reward Challenge, they sent Candice to Exile Island as punishment for her duplicity; Ozzy stated upon winning the challenge that "mutineers are the first to die!"

Rarotonga would also lose the next Immunity Challenge, resulting in both Brad, who had become increasingly alienated from his tribe, and Jonathan, who suddenly found himself low-man on the totem pole in a new tribe, being on the chopping block. After Brad declared that he didn't trust anyone on the tribe, he was voted out unanimously.

The Rarotonga social politics would become apparent yet again as Jonathan filled the rotating spot of tribe pariah, derided for being older and less trustworthy than the other tribe members. A lack of cooperation would sink Rarotonga at yet another challenge loss, resulting in Candice being sent to Exile Island for the third time by a vengeful Aitutaki. At this time, Jenny became unaware of her tribe mates' loyalties: she assumed that herself, Adam, Nate, Parvati, and Rebecca would stick together to vote out the mutineers. It would quickly become apparent that this was not the case.

Before the next challenge, Jeff Probst introduced a twist: the tribe that lost would take a mysterious message in a bottle back to camp. Rarotonga lost once again to the diminished Aitutaki tribe, and were sent to Tribal Council, where in spite of the group's apprehensions about Jonathan's trustworthiness, Rebecca was voted out unanimously for being a detriment in challenges. However, when Parvati read the bottle's message out loud, it was revealed that Rarotonga would immediately vote out a second member. Jenny was eliminated in a blindside 4-2 vote. The real estate agent delivered a middle finger to the group on her way out of the game.

On Day 25, Rarotonga, was reduced to five members, four of whom were members of the original, all-Caucasian Rarotonga, and one former Manihiki, Nate. The tribes entered the merge into the Aitutonga tribe and stayed at the Rarotonga camp for the rest of the game. 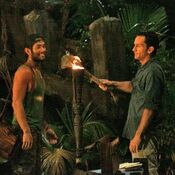 Raro at their fifth Tribal Council.