Occurring at the very start of the game (sometimes even before the tribes are divided), the challenge typically involves a swimming and/or foot race to locate an object of importance, such as individual immunity, the Medallion of Power, or supplies (such as rice and fire).

Castaways must race individually to a certain marked area to find and retrieve an Immunity Necklace that will keep them safe at the first Tribal Council the person attends. In Nicaragua, the Immunity Necklace was replaced with the Medallion of Power. In Cambodia, Game Changers, and Heroes vs. Healers vs. Hustlers, the object of the challenge was to get to a reward before the other tribe.

In Palau, the castaways were given a choice. Either row to shore with everyone else, or jump off the boat and swim across individually to the drop-off beach where two individual Immunity Necklaces (one for each gender) were waiting. The first man and woman female to reach the necklaces would win immunity. Stephenie LaGrossa and Jonathan Libby made a crucial mistake by jumping off the boat and trying to outswim it, but the boat went far ahead of them. In the end, Ian Rosenberger easily won the men's immunity over his closest competition, Gregg Carey. The race for the second immunity was closer, with Jolanda Jones barely beating Jenn Lyon for the women's immunity.

The challenge re-appeared in Micronesia once the Favorites were brought out. The castaways had to race across a lagoon and to the tribe boats to find the idols. Jon Dalton was the first person to locate the idols, but mistakenly grabbed the Airai tribe's idol, instead of that of his own tribe, Malakal. Yau-Man Chan saw this and beat Jon to claim Malakal's idol. Kathy Sleckman won for Airai when Yau-Man pointed out to her where it was.

In Nicaragua, the twenty contestants (as yet undivided by tribe) were instructed to scour the island for the Medallion of Power, with the person who found it winning the item for their tribe. Brenda Lowe found the Medallion, and took it with her to La Flor tribe. However, the tribe chose to exchange the Medallion of Power (and thus give it to Espada) for fishing gear.

In Game Changers, several yards from the ship were two colored-coded knots that had a toolkit. Ozzy Lusth from Nuku took off and quickly swam to the knots, with no one from the Mana tribe initially contesting Ozzy due to his reputation as a strong swimmer. As Ozzy started untying the knots, Caleb Reynolds from Mana jumped into the water in an attempt to catch up, but it was too late as Ozzy had untied the knot, winning the toolkit for Nuku.

In Heroes vs. Healers vs. Hustlers, the tribes had to collect supplies and jump into their row boats. Once they get to shore, they had to hook their boat and untie a torch, before lifting someone up high enough to ignite it with a fire pit fifteen feet above the ground. The first tribe would win a fire kit, while the second received flint. The Soko and Levu tribes quickly pulled ahead of the Yawa tribe, which was struggling in the boat portion, and finished in first and second respectively. By the time the challenge was over, the Yawa tribe still had not reached the shore.

The castaways compete in Palau. 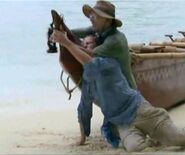 Ta Keo and Bayon race for a bag of rice (Cambodia).

The tribes compete in Game Changers.

The tribes paddle towards the fire in Heroes vs. Healers vs. Hustlers.