A method of elimination by which a contestant voluntarily leaves the game without an official vote taking place.

Pearl Islands
All-Stars
Palau
Fiji
Micronesia
Nicaragua
Philippines
Blood vs. Water
Cagayan
San Juan del Sur
David vs. Goliath
Edge of Extinction
Winners at War
A quit is a rare method of elimination in which a contestant chooses to leave the game voluntarily without a vote taking place.

The first quit occurred in Pearl Islands. Following the Outcasts twist on Day 19, both tribes were forced to vote out a member in a Double Tribal Council. Despite being physically fit, Osten Taylor asked his tribe to vote him out due to the physical strain the game had taken on his body. Jeff Probst waived the vote and Osten became the first person to quit the game at the Morgan tribe's Tribal Council. His final words were not aired, and his torch was not included in the Rites of Passage but was instead laid down at the Tribal Council site.

All-Stars was the first season in which two contestants quit. Around Day 9, Jenna Morasca began experiencing regret over leaving her mother, who was dying of cancer, to play Survivor. She elected to leave the game at the next Immunity Challenge. She rushed to her mother's bedside, and eight days later, her mother passed away. At the Immunity Challenge on Day 13, a naked Richard Hatch rubbed himself against Susan Hawk, leaving her distraught. Over the subsequent days, she grew more angered and embarrassed by the incident. On Day 17, when host Jeff Probst made a comment about the incident, Susan began an impassioned speech about the situation, deriding Jeff for making light of the situation and quitting the game.

In Palau, Janu Tornell became the first contestant to quit the game and continue to participate as a member of the jury. After being ostracized and ridiculed by her tribe, Janu elected to leave the game on her own terms during the Tribal Council on Night 27, claiming that she had gained everything she wanted from the experience and to prevent the Koror Alliance from voting out Stephenie LaGrossa.

In Fiji, Gary Stritesky reported feeling dizzy and experiencing chest pain, fearing he had cracked a rib during a Reward Challenge. The medical team was called in to evaluate his condition. He was deemed to be fit to continue in the game, although his tribemates encouraged him to speak up if he continued to struggle. On Day 10, he suffered vertigo due to an insect allergy and pulled himself from the game.

In Micronesia, Kathy Sleckman suffered a mental breakdown brought on by isolation and paranoia. She quit the game on Day 19, subsequently stating that her breakdown was triggered by withdrawal from her Zoloft medication and that she had intended to use a machete to cut off one of her fingers to instigate a medical evacuation.

Nicaragua was the first season in which two contestants quit at the same time when NaOnka Mixon and Kelly Shinn quit on Day 28. After heavy rain, NaOnka expressed a desire to quit at the conclusion of a Reward Challenge despite her team winning the challenge. Jeff Probst instead scheduled a Tribal Council that night for her to reconsider. NaOnka went on the reward, while Kelly S. returned to camp after stating that she too had had enough and planned to quit along with NaOnka. Despite their tribemates and Jeff's arguments for remaining in the game, both women quit at Tribal Council. Due to the precedence set in Palau, NaOnka and Kelly S. continued as members of the jury. Their torches, however, were propped beside the exit area to remind the two girls of their decision to quit.

In Philippines, Dana Lambert experienced severe stomach pain and nausea. Although medical cleared her health for the next twelve hours on Day 12 and stated that an evacuation was not needed, Dana insisted that she was too sick to continue and elected to leave the game to prevent her illness from worsening.

In Blood vs. Water, Colton Cumbie felt alone on his Galang tribe and being separated from his fiancé, Caleb Bankston, feeling like he had no chance of winning due to being on the outs of his tribe and no one talking strategy with him. He then decided to quit the game minutes before the Day 7 Redemption Island duel.

In Cagayan, Lindsey Ogle got into an argument with Trish Hegarty after the events at Tribal Council that lead to Cliff Robinson's blindside. Fearing that she might end up physically assaulting Trish, Lindsey decided to pull herself out of the game on Night 14.

In San Juan del Sur, Julie McGee was feeling depressed at the merge, seeing the remaining complete loved ones being reunited while hers, boyfriend John Rocker, had already been eliminated days prior. Combined with her hasty decision to keep her share of the tribe's trail mix from the merge feast for consumption at a later time, angering the rest of the Huyopa tribe, her loneliness and guilt led her to quit the game on Day 18.

In David vs. Goliath, Bi Nguyen had previously injured her medial collateral ligament, from which she was still recovering during her time in the game. During the Immunity Challenge on Day 9, Bi further injured her MCL, leading medical to wrap it in cloth to help. The following day, as the tribes gathered for a Tribe Switch, Bi decided to pull herself from the game to prevent it from worsening and affecting her career as an MMA fighter.

In some situations, a contestant has requested that their tribe vote them out of the game. Although not officially a quit, the circumstances surrounding the vote result in the public, or production, perceiving the incident as 'quitting the game'. Usually, this is successful in getting said player eliminated, with the exceptions of Shawna Mitchell, who was denied her wish in The Amazon when her tribe elected to vote out JoAnna Ward instead; and Jenn Brown in Worlds Apart, who remained in the game despite wanting to be voted out on Day 24.

In Borneo, B.B. Andersen did not feel like he fit in with his tribe, and he requested to be voted out, stating that he "had already won". His tribe honored his request, and B.B. was voted out on Day 6.

In The Australian Outback, at the final five, Rodger Bingham requested that the alliance of Colby Donaldson, Keith Famie, and Tina Wesson vote him out over Elisabeth Filarski because he felt that he would prefer to have her continue to play rather than himself. His request was granted on Day 36.

In Palau, Jeff Wilson tripped on a coconut in the middle of the night and rolled an ankle. After Ulong lost the following challenge, Jeff asked his tribe to vote him out as he feared he was holding back his already-struggling team. Despite some skepticism, he was voted out on Day 8.

Also in Palau, Ian Rosenberger voluntarily dropped out of the Final Immunity Challenge on Day 38, asking eventual challenge and season winner Tom Westman to vote him out, as a sincere attempt to reconcile with both Tom and Katie Gallagher; the two had been on bad terms with Ian since Ian had attempted to blindside Tom the previous night. Tom complied and, at an impromptu Tribal Council, Ian became the final member of the jury.

After the Malakal tribe lost the first Immunity Challenge in Micronesia, Jon Dalton stated that his heart was not in the game and that he wanted to return home to his expectant girlfriend, asking his tribe to vote him out. His request was granted and he was unanimously voted out on Day 3.

Also in Micronesia, Chet Welch asked his tribe to vote him out on Day 17, since he had a piece of coral lodged in his foot and was most likely going to be medically evacuated soon after anyway.

In Gabon, GC Brown became increasingly disengaged from the game, culminating in him disappearing immediately before an Immunity Challenge. When Fang lost said challenge, he asked his tribe to vote him out, and they granted his request on Day 15.

In Winners at War, Ben Driebergen asked Sarah Lacina to vote him out, feeling that it would allow Sarah to have a better chance at winning the game. Ben later revealed that he felt that he did not have a chance to win the game due to a lack of respect from the jury.[1] Sarah granted his request, and he was voted out on Day 37.

Host Jeff Probst is known to express disgust for quitters of the game and has stated that contestants who quit will never be asked to return.

The controversial double quit in Nicaragua led to an amendment to the Survivor Rulebook. Probst revealed at the Nicaragua Reunion Show that, in subsequent seasons, if a contestant chooses to quit the game during the jury phase, the producers will deliberate whether or not the contestant will participate on the jury. The producers may also hold the right to deny the quitter's consolation prize.

Jenna M. quits to be with her dying mother. (All-Stars) 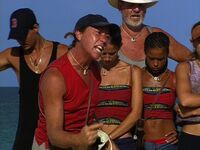 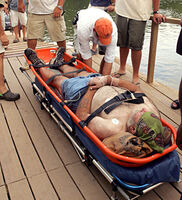 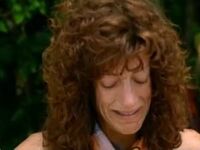 Dana pulls herself from the game for medical reasons. (Philippines)

Colton quits at the Redemption Island Arena. (Blood vs. Water)

Bi quits the game due to her injured knee. (David vs. Goliath).