Tribes race to light a series of torches

Borneo
The Australian Outback
Africa
Marquesas
All-Stars
Cambodia
Quest for Fire (also known as Bridging the Gap, Trail Blazer, and Outrigger Fire Quest) is a recurring challenge in Survivor that originated in Survivor: Borneo and has been reused in later seasons.

In most iterations of the challenge, tribes will have a vehicle fitted with a fire cauldron and two torches. The tribes will use the torches to light a series of torches or woks both on land and in the water. All members must have their hands on the raft at all times. The first tribe(s) to reach the finish win(s).

In The Australian Outback, the tribes would first cross a dilapidated bridge and pull the raft across the river while keeping their torch lit. The first team to climb to the top of a 30-foot tower and ignite it with their torch wins immunity.

In Africa, as the season is filmed in a desert setting as opposed to a beach, a land variant of the challenge is made. The tribes use carts instead of rafts.

In Marquesas, the cauldron is on a separate platform.

In All-Stars, the tribes must start on a floating platform and unclip their raft first. They must then carry the raft while they light every fire wok they pass through, before they go under a bamboo crawl.

In Cambodia, after carrying the raft to the shore and light all the torches, one tribe member must open a gate similar to the Jail Break challenge and finally light the bonfire.

This challenge was used as the inaugural challenge of Borneo for tribal reward and immunity in the form of 50 waterproof matches. Tagi got an early lead, but lost it when Sonja Christopher was unable to keep up with her tribe, causing her to fall and be dragged, allowing Pagong to catch up and eventually win the challenge.

In The Australian Outback, Ogakor took a slight lead after the bridge and extended it on the river crossing after Rodger Bingham of Kucha got his leg caught in a rope. Once Kucha got to the third section, their raft overturned on their torch, putting it out and disqualifying them. Mitchell Olson lit the fire for Ogakor, giving them immunity.

In Africa, after Ethan Zohn and Frank Garrison lit the first fire towers for their tribes, Boran took a slight lead. Clarence Black and Silas Gaither both rushed to the mountaintop to light their second towers before pressing on. Both tribes struggled as players stumbled on both sides on their way to the beach where their third towers are. Shortly after Lex van den Berghe and Frank light their third and final towers, Diane Ogden collapsed to the ground. This sets Boran back and gives Samburu the lead. Although Boran tries to catch up, Samburu is first to cross the finish line and wins reward and immunity.

The was used in Marquesas where the tribes were even until Maraamu dropped their torch in the water, allowing Rotu to win immunity easily.

This challenge was used in All-Stars as the first challenge as well for immunity. Saboga struggled early on and was never able to recover. Chapera finished first, and Mogo Mogo finished shortly after in second.

The challenge re-appeared as the first tribal Immunity Challenge in Cambodia. Even though Ta Keo gained a lead when Keith Nale accidentally extinguished his tribe's flame, Bayon was able to catch up at the Jail Break portion of the challenge when Kelly Wiglesworth had trouble getting the key. Bayon pulled off a come from behind and ultimately won the challenge. During the challenge, Kelley Wentworth found Ta Keo's Hidden Immunity Idol.

The bonfire in Borneo. 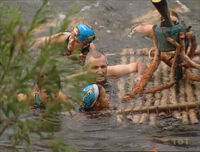 Kucha pushing their torch across the river (The Australian Outback).

A land variant of the challenge was used in Africa. 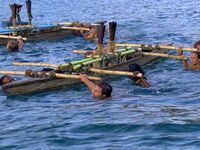 The challenge in Marquesas. 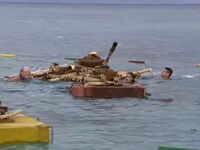 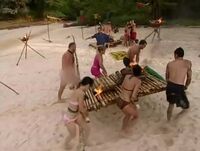