Vecepia Towery (Winner)
The Outsiders Alliance is an alliance in Survivor: Marquesas formed to counter the dominant Rotu Four, and the first alliance in Survivor history where unaligned castaways banded together to go against a dominant, single alliance.

Revelations at the Summit

On Day 19, Kathy Vavrick-O'Brien and Rob Mariano volunteered to be representatives for the merge, and both met at a place called Tohua. At Tohua, Rob shocks Kathy by telling her that her old tribemates from Rotu plan on aligning with him, Sean Rector and Vecepia to target the remaining Maraamu members upon the merge. Feeling betrayed by her old friends, particularly Zoe Zanidakis, Kathy makes a pact with Rob promising not to vote out each other before turning in for the night.

On Day 21,  Rob questions Zoe as to whether she planned on voting for Kathy. Zoe's denial upsets Kathy, who walks off uncertain as to who is being loyal. However, Rob's plan failed as he was voted out at the merged Tribal Council. The following morning Kathy tells Paschal English that they need to target the stronger players. After the Reward Challenge, Sean convinces Kathy to vote with him, and Kathy tries tries to convince Neleh Dennis to flip, though she refuses, and Pashcal as well refuses.

At the Immunity Challenge on Day 24, the Rotu Four acted smug and arrogant. After the challenge, Vecepia senses their cockiness, and Pashcal showed concerned for their behavior. At Tribal Council, Paschal and Neleh sided with Kathy, Sean, and Vecepia, and blindsided Rotu Four leader John Carroll. The five then eliminated the remaining members from the Rotu Four

After all their rivals were voted out, the five were forced to turn on each other on Day 36. Paschal and Neleh targeted Sean, while Sean and Vecepia targeted Neleh, leaving Kathy as the swing vote. Kathy sided with Paschal and Neleh, voting out Sean.

Drawing Rocks at the Final Four

On Day 37, Vecepia won immunity. Shortly before the vote, Kathy negotiated with Vecepia by asking her to keep her immunity but not vote against her in order to force a tie. Vecepia accepted Kathy's offer, leading to a 2-2 tie between Kathy and Neleh.

Jeff Probst then revealed the tiebreaker rule for this season, which would become standard in later seasons of Survivor. If a tribe is deadlocked, they are given two minutes to discuss whom among the tied contestants should be next to go and come to a unanimous decision. Failure to finalize such decision would lead to a random drawing of rocks between Kathy, Neleh, and Paschal (but not Vecepia who was immune).

With Paschal unwilling to turn on Neleh, the vote remained tied, so the tribe drew rocks. Kathy and Neleh drew yellow rocks, while Paschal drew the unlucky purple rock and became the sixth member of the jury.

At the Final Immunity Challenge, Vecepia tries to make a deal with Neleh by asking if she will take her to the final two if she steps off. Neleh agrees and Vecepia steps off her logs, giving Neleh individual immunity. At Tribal Council, Neleh voted out Kathy making herself and Vecepia the Final Two. During the Final Tribal Council, Neleh was chastised for betraying the Rotu Four and riding coattails, while Vecepia was grilled for flip flopping alliances and betraying Kathy. Vecepia was ultimately awarded the title of Sole Survivor in a close 4-3 vote.

Neleh and Vecepia in the Final Two. 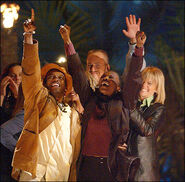 Vecepia is the Sole Survivor of Survivor: Marquesas.
Add a photo to this gallery

Retrieved from "https://survivor.fandom.com/wiki/Outsiders_Alliance?oldid=593107"
Community content is available under CC-BY-SA unless otherwise noted.