Merged with Kucha on Day 19

Ogakor is a tribe from Survivor: The Australian Outback.

Despite losing three consecutive Immunity Challenges, Ogakor became one of the earliest examples of a well-coordinated tribe, even succeeding in obliterating the rival Kucha tribe after the merge. This group comprised of some of the series' most iconic contestants including challenge dominator Colby Donaldson, notorious villain Jerri Manthey, first female winner Tina Wesson, and future Sole Survivor Amber Brkich. Their tribe color is green.

Tensions rose as soon as Ogakor found its camp, with Keith Famie and Jerri Manthey butting heads over the leadership of the tribe. The twosome's arguments would provide background noise for their fellow castaways well into the merge. Meanwhile, Colby Donaldson scored some points with the group with his luxury item: a large Texas flag that could be used as a tarp for the shelter. The tribe quickly fractured along age lines: Jerri and the younger Ogakor members; Colby, Amber Brkich, and Mitchell Olson, quickly took over the tribe, much to the consternation of the older group. Keith and Jerri immediately resumed their arguing over how to place the flag. They would avoid immediate danger when Ogakor won the first Immunity Challenge, granting them immunity and fifty waterproof matches.

Ogakor's good fortune continued twofold at the next Reward Challenge. The tribe won the challenge, which gave them a crate full of blankets, and vital information: Tina Wesson was able to figure out that Jeff Varner had received a vote at the first Tribal Council. Ogakor would use this information later to conquer the Kucha tribe after the merge.

However, the tribe's winning streak fell apart at the Day 6 Immunity Challenge, when Tina was unable to stomach cow tripe and later, a mangrove worm. Before Ogakor attended Tribal Council, controversy occurred when Jerri accused Kel Gleason of smuggling beef jerky into the game and eating it behind the tribe's back. The accusation spread like wildfire and the group, despite protests from Maralyn Hershey, rummaged through Kel's backpack. No beef jerky was found. Kel offered his razors to the group as a peace offering which Jerri saw as a huge sign of guilt. Despite the gesture, Kel was deemed untrustworthy, and was voted out 7-1.

Day 7 found a forest fire burning across the river from Ogakor, and conflict brewing as Jerri and Keith came to their umpteenth disagreement about the tribe's cooking duties. A Reward Challenge win did nothing to relieve the tension in the group, particularly when they lost the third Immunity Challenge. Maralyn's physical inabilities had become particularly apparent when the older woman's repeated stumbling cost the tribe a victory. In spite of the group's fondness for Maralyn and the police officer's close relationship with Tina, Maralyn was voted out of the tribe 5-1-1. The Tribal Council was notable for Jerri's revelation of her list of friends: Colby, Amber, and Mitchell. The list did not include Tina, who had been under the impression that she was a part of Jerri's alliance.

Having been singled out by Jerri, Keith and Tina realized they were on bought time. It was at this point that they turned to Colby, the member of Jerri's alliance who had the least allegiance to the others. It was a risky strategy: while Colby acknowledged Jerri's acerbic personality and bossy demeanor, he also seemed to enjoy flirting with the actress and often played into her wiles. When Ogakor lost its third straight Immunity Challenge on Day 11, Colby recognized that Mitchell's recent lethargy could be a costly detriment in the challenges. He joined Tina and Keith in voting for his former ally, resulting in a tie between Keith and Mitchell at Tribal Council. When a revote didn't resolve the situation, Jeff Probst asked the men which of them had received the most votes. Keith had received none, while Mitchell had gotten one, Keith had voted for Mitchell, rather than Maralyn, at the previous Tribal Council. The chef's foresight would end up costing Mitchell the game.

The repeated immunity losses had taken a toll on the tribe's morale. Ogakor's defeat at the next Reward Challenge would see Amber breaking down in tears, proclaiming that she was "tired of losing." After a pep talk before the next Immunity Challenge, the tribe managed to rally a win. Ogakor won its first Immunity Challenge in twelve days, finally sending Kucha to Tribal Council to vote off its second member, Kimmi Kappenberg, but not before Kimmi revealing that Jeff Varner has previous votes (which happened at the Day 4 Reward Challenge), a fatal forecast of days to come for Kucha.

Nearly three weeks into the game, the women of Ogakor allowed their fantasies to run wild—Jerri and Amber in particular fantasized very loudly about chocolate, much to Colby's dismay, especially when Jerri talked about covering his body in chocolate syrup and licking him clean. He vented this frustration when Jerri's poor leadership resulted in a loss at the Day 17 Reward Challenge, hurling a bucket of water in her face. Ogakor fretted about being down a member going into the next Immunity Challenge. But their fears have been relieved, as Kucha's Michael Skupin accidentally passed out, and fell into their bonfire and was evacuated from the game, forgoing the sixth Immunity Challenge. With Michael's sudden exit, this ensured that the warring tribes would enter the merge at five members each. On Day 20, the two tribes formed Barramundi. 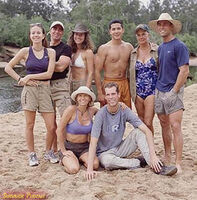 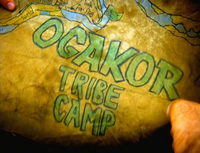 Ogakor's shot in the intro. 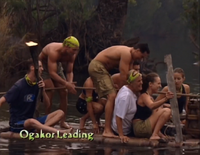 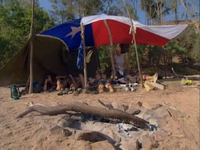 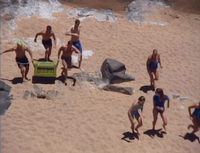 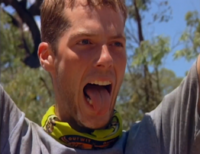 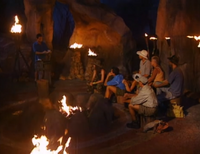 Ogakor at their first Tribal Council. 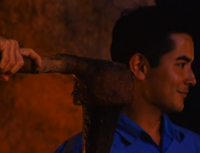 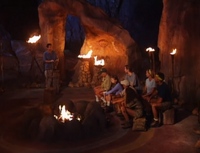 Ogakor at their second Tribal Council. 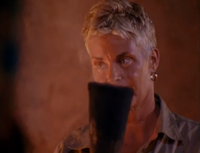 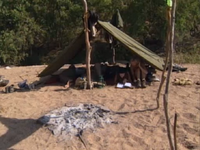 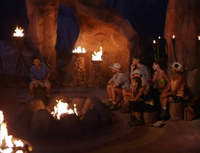 Ogakor at their third Tribal Council. 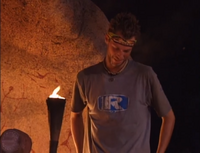 Mitchell voted out.
Add a photo to this gallery

Retrieved from "https://survivor.fandom.com/wiki/Ogakor?oldid=585163"
Community content is available under CC-BY-SA unless otherwise noted.