One World
Blood vs. Water
Odd Shaped Bottoms is a recurring challenge from Survivor.

Castaways must race across a ladder while maneuvering a bag of blocks along with them.  When they reach the end, they would use the blocks inside to solve a puzzle, so the top of the puzzle is completely flat and level.

The challenge debuted in Survivor: One World, where it was split into two rounds. In the first round, the 11 castaways had to race across a ladder bridge, maneuvering bags of puzzle pieces along the way. The first four castaways to get all their bags across the bridge moved on to the second round. In round two, the castaways would use the puzzle pieces in the bags to complete a 60 piece puzzle. Alicia Rosa, Jay Byars, Kim Spradlin, and Troyzan Robertson moved on to the final stage where Jay came from behind to take the win.

The castaways compete in One World. 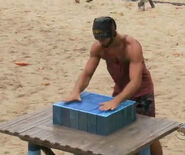 Jay completes his puzzle (One World).