Merged with Yaxhá on Night 18

The stronger tribe of the season in both of its iterations, Nakúm began with most of its male members weakened after the opening Reward Challenge but steadily recovered since, having won eight of twelve pre-merge challenges. The post-switch Nakúm tribe continued their dominance during the merge phase of the game until the last remaining member of the rival alliance successfully broke them apart. Their tribe color is yellow.

Following the addition of Survivor: Palau contestant Bobby Jon Drinkard, the Nakúm tribe proved to be a powerhouse: maintaining a considerable lead against the rival Yaxhá during the Day 1 Reward Challenge where the tribes had an 11-mile race to the better of two camps. Nakúm won and secured the camp the following day, but at the cost of the men getting sick and injured. This became a concern for the female members as it would significantly affect their performance at the next Immunity Challenge. The women's worries did become true as the toll the hike took on the men did lose them them immunity on Day 3, sending them to Tribal Council. That night, Jim Lynch, who was the most ailing of the men and later tore his bicep at the Immunity Challenge, was unanimously voted out, 8-1.

Despite the men of Nakúm down from sickness, the tribe four challenges. During this period, Blake Towsley, who was also sick, was continued to be nursed by Margaret Bobonich. Margaret's leadership of the tribe however grated to Judd Sergeant, who perceived her as bossy when the tribe was setting the tarp they won from a Reward Challenge. Nakúm's four-challenge winning streak however avoided them from attending the next two Tribal Councils.

On Day 9, the tribes were switched. The two tribes chose the most deserving man and woman to go to a picnic, and they chose Margaret and Judd. Those two were away when the new tribes were separated, meaning they were stuck on their current team. The new Nakúm consisted of Brooke Struck, Cindy Hall, Judd, Margaret, and new tribemates Jamie Newton, Lydia Morales, Rafe Judkins, and Stephenie LaGrossa. The new Nakúm tribe lost their first Immunity Challenge on Day 11. The members from the original Nakúm had decided that they would stick together and pick the other tribe off, but Judd had second thoughts. He decided he would flip on his old tribe, joining the old Yaxhá tribe members, and backstabbed his old tribe members one by one. He started with Brooke, then Nakúm won the next Immunity Challenge. When a Double Tribal Council forced them to vote someone out on Day 15, they continued with voting out Margaret. Nakúm won the next Immunity Challenge on Day 18, and the two tribes immediately merged after Yaxhá's last Tribal Council.

Nakúm's shot in the intro.

Nakúm at their first Tribal Council. 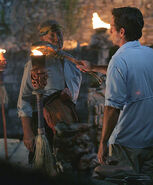 Nakúm at the third Immunity Challenge.

Nakúm before the Tribe Switch.

The new Nakúm at the fourth Immunity Challenge.

Nakúm at the fifth Reward Challenge.

Nakúm celebrating winning the Reward Challenge and the right to win individual immunity.

Nakúm listening to the instructions for the individual Immunity Challenge.

Nakúm at their last Tribal Council.

Nakúm after the Double Tribal Council.