The contestants are divided into equal teams. One at a time, they race through an obstacle course. They crawl under a low cage (or walk across a series of balance beams), clamber up a steep slope and slide down into a mud pit. They then search for a bag of balls buried in a designated mud pit. Upon retrieving the bag of balls, the contestant crawls under a wooden bar by digging through a pit of rice. Upon reaching the mat, the next teammate may begin the course. Once all teammates have reached the end, the balls must be thrown into a narrow tube about as high as a basketball hoop. The first team to sink all their balls into the tube wins the challenge.

In Survivor: San Juan del Sur each tribe had to race to dig up a bag buried in the sand, which contained two keys. They had then to crawl through the mud and use one of the keys to open a gate. The next step was to shake a basket to release sandbags. Once a tribe had collected all their sandbags, then two tribe members had to attempt to land those sandbags on wobbly platforms.

This challenge debuted in Survivor: Philippines as a Reward Challenge. Jonathan Penner pioneered the strategy of finding all the ball-bags in the mudpit and placing them in a corner, allowing the contestants that followed to simply grab a bag of balls on their way through. The strategy gave his team a strong lead, and Penner, Carter Williams, Denise Stapley, and Malcolm Freberg won the challenge, winning a trip to a local Filipino village where they will deliver school supplies and various toys, and receive a feast.

The challenge reappeared in Survivor: Caramoan, again as a Reward Challenge. Malcolm Freberg utilised Penner's successful strategy from the previous season to find all ball-bags in one go. However, the opposing team adopted the strategy partway through the challenge, and Reynold Toepfer found all the bags first. This gave Reynold, John Cochran, Dawn Meehan, Erik Reichenbach, and Phillip Sheppard a lead, and they won the challenge, winning a trip to a resort for lunch.

In Survivor: San Juan del Sur Coyopa had trouble to dig their keys and Hunahpu held onto their early lead to land ten sandbags on the platform before Coyopa even threw one, winning Immunity.

The course in Philippines.

The red teams in the final stage of the challenge (Philippines).

The course in Caramoan. 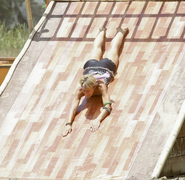 Andrea races through the mud (Caramoan).

Coyopa trying to get their sandbags (San Juan del Sur).
Add a photo to this gallery

Retrieved from "https://survivor.fandom.com/wiki/Muddy_Waters?oldid=553254"
Community content is available under CC-BY-SA unless otherwise noted.