Borneo
Cook Islands
Cagayan
Mud Pack (also known as Mud Run) is a recurring Reward Challenge of Survivor. Debuting in Survivor: Borneo, it has since been reused in Survivor: Cook Islands and Survivor: Cagayan.

Under a time limit, tribe members dive into a mud pit and cover their body with as much mud as they can. They then race back and scrape it off into a bucket. They cannot carry mud in their arms or in their hands, only their body. The buckets are then weighed, and the castaway with the heaviest bucket wins.

In Survivor: Borneo, the contestants returned to the mud pit of old Pagong camp to compete for cold beer and a trip to a bar to watch the first five minutes of the season. The castaways had five minutes. The winner was Kelly Wiglesworth.

In Survivor: Cook Islands, the castaways had to dive into a pool of mud and cross an obstacle in the way of return. The three castaways with the heaviest buckets after ten minutes would win a night at a spa. Ozzy Lusth, Parvati Shallow, and Yul Kwon won.

It appeared as the final five Reward Challenge in Survivor: Cagayan. After ten minutes, Tony Vlachos' bucket was literally overflowing with mud. Because of this, the other castaways elected not to have the buckets weighed and Tony was deemed the winner.

Richard and Rudy putting mud in their buckets in Borneo.

The challenge in Borneo. 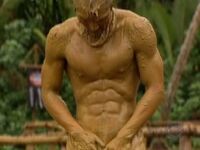 Yul at the challenge in Cook Islands. 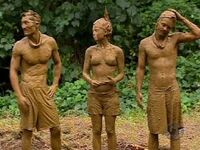 The winners of the challenge in Cook Islands.

The contestants ready to compete in Cagayan.

The contestants competing in Cagayan.