Merged with Ravu on Day 22

Moto is a tribe from Survivor: Fiji.

For winning the inaugural Immunity Challenge, Moto was supplied with luxuries such as a sofa and cutlery, while their opponents dwindled on basic essentials. The tribe won every single Immunity Challenge and all but one Reward Challenge. Their tribe color is green.

On Day 3, Sylvia Kwan, who led the initial group of 19 castaways in building a luxurious shelter, was asked to divide the remaining 18 castaways into two tribes. The newly divided tribes competed for the right to live at a camp stacked with amenities, the luxurious shelter, silverware, a sofa, and other luxuries uncommon to the game of Survivor. Moto won the first Immunity Challenge and secured their place at the camp of luxury, while Ravu was sent to live in hardship.

Perhaps as a symptom of their being so much more well-off than Ravu in terms of camp life, Moto would continue to win challenge after challenge. On Day 6, Moto won their second Immunity Challenge, along with fishing gear. During this time, Moto settled into a comfortable social dynamic. The tribe was largely run by an opportunistic alliance of five: Alex Angarita, Boo Bernis, Edgardo Rivera, Lisi Linares, and Stacy Kimball. A sixth member, Liliana Gomez, was convinced that she, too, was a part of this alliance, but was being misled. Outsider Dreamz Herd, meanwhile, had formed tight friendships with Cassandra Franklin and Gary Stritesky, whom the other castaways had taken to calling "Papa Smurf."

On Day 7, Moto won the first official Reward Challenge of the game, but at a cost: Gary took a hard fall during the challenge, and seemed to be in pain after returning to camp. Over the next several days, Gary struggled with labored breathing and chest pains as the tribe watched on in concern. Gary would not be voted out of the tribe, however, as Moto won their third consecutive Immunity Challenge. By Day 9, things were briefly looking up as Moto won yet another Reward Challenge, earning a bounty of food, a third fishing kit, and a king-sized bed. Liliana took full advantage of the new bounty, offering up massages and incensing Lisi, who believed Liliana was using her "diabolical Mexican mind" to manipulate the men of the tribe. On Day 10, though, Gary's condition took a turn for the worse, and the Minnesota school bus driver asked to be evacuated from the island. This loss brought the dominant Moto tribe down to eight members.

Host Jeff Probst shocked the tribes by introducing a message in a bottle at the Day 11 Immunity Challenge. Moto excelled yet again, but were shocked to be confronted with an ultimatum: either forfeit their luxurious camp to Ravu, but keep immunity, or keep their camp, but also go to Tribal Council. In a controversial decision, the tribe chose to vote out one of their own in order to keep their creature comforts. Upon returning to camp, Dreamz publicly named Cassandra and Lisi as the weak links of the tribe. This decision earned much of the tribe's ire, but the candidates for elimination had largely boiled down to the sweet but physically inept Cassandra, and the strong but threatening Liliana. With the women of the majority alliance lobbying hard for Liliana's exit—much to the chagrin of Alex—the loan officer's fate was set. At Tribal Council, Liliana was blindsided in a 6-1-1 vote.

Following the successive exits of Gary and Liliana, Cassandra and Dreamz were largely left alone within the tribe. After Moto won yet another Reward Challenge and a coffee set to go with it, it became apparent that Lisi and Stacy were going out of their way to make the tribe's outsiders feel unwelcome. Alex noted this with trepidation; if the two women did not at least pretend to clean up their act, their tribe was risking a betrayal after the merge. Cassandra and Dreamz confirmed as much in confessionals: they were in the market for a new alliance.

On Day 15, the tribes were switched up in a Schoolyard Pick. The result was that Boo, Cassandra, and Stacy were sharing the luxurious Moto camp with three former members of Ravu: Earl Cole, Michelle Yi, and Yau-Man Chan. With the balance of power now even and much of his former alliance sent to Ravu, Boo was uneasy around the tribe's new members. As Boo predicted, Earl was quick to court Cassandra as a swing vote, as it was clear that she had become disenchanted with her former tribemates.

The alliance between Earl and Yau-Man would soon prove fruitful as Earl led Moto away from camp under the guise of retrieving their stranded boat in order to buy Yau-Man time to search for the Hidden Immunity Idol. On Day 18, Yau-Man finally discovered the first of the idols, and vowed to share it with Earl should the situation arise. Earl's luck was temporary; later that day, Moto would lose its first challenge when Ravu won a reward of hot dogs and beer at an arcade, and sent Earl to Exile Island for the third time.

After Yau-Man created a fake Hidden Immunity Idol for public consumption back at camp, the tribe rallied with an immunity victory; the tribe would remain undefeated in Immunity Challenges. Earl led the tribe to their next victory, a "meke" dance-off challenge, which earned them a feast. Yau-Man's unorthodox, but effective efforts at a target-shooting Immunity Challenge, meanwhile, helped them earn immunity. This was fortunate for Stacy, who had been targeted by Michelle as untrustworthy and would have likely been the next to go.

On Day 22, the Moto tribe met with Ravu on Exile Island, where the two tribes merged to become Bula Bula. The two tribes then returned to the old Moto camp for the duration of the game, however, the creature comforts had been removed from the camp.

Moto competing in By the Numbers for reward. 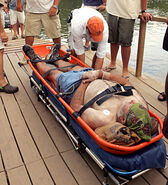 Gary pulls himself from the game. 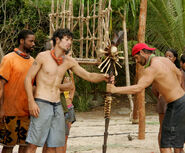 The new Moto tribe at camp. 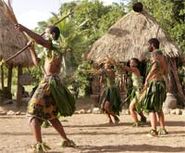 Moto doing the meke for reward.