Scattered in a challenge arena are numerous pairs of matching objects or symbols hidden under covers. One at a time, contestants will enter the field and uncover two items. If they match, they (or their tribe) score a point. If the items do not match, they are re-covered and the next contestant takes their turn. The first tribe/contestant to score a designated number of points, or the tribe/contestant with the most points when all covers have been unveiled wins the challenge.

Additional rules have appeared season to season, such as the inclusion of items that do not have a matching pair. In Samoa, tribes could choose to forfeit a point in exchange for adding the uncovered item into a reward pool for the winning tribe.

The challenge debuted in Survivor: The Australian Outback as Memory, where it was used for individual immunity. 18 pairs were in the field, and the highest score at the end of the game would win. Colby Donaldson won the challenge, winning immunity.

The challenge was reappeared in Survivor: Vanuatu as a Reward Challenge. The Lopevi tribe fell behind early and eventually fell to the Yasur tribe, 5-2. The women won the expertise of a local bushman to better their camp.

In Survivor: Fiji, the challenge was used as for tribal immunity. Tribes matched words and numbers on sandwich-boards, with the first tribe to score seven pairs (out of 13) winning. Although Ravu came dangerously close to winning, Moto continued their winning streak to take home immunity.

Survivor: Samoa used the challenge for tribal reward under the name Brain Food. Tribes were permitted to forfeit a point in the challenge to place any matched item into the reward pool that would be taken home by the winner. Galu won the challenge over Foa Foa, receiving the forfeited items and a sailing adventure.

The challenge in The Australian Outback. 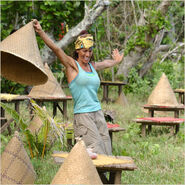 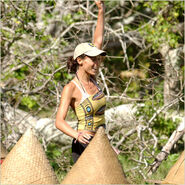 The challenge in Fiji.

Lisi after running off the platform (Fiji).

The challenge in Redemption Island.
Add a photo to this gallery

Retrieved from "https://survivor.fandom.com/wiki/Memory?oldid=553219"
Community content is available under CC-BY-SA unless otherwise noted.