Matchmaker (also known informally as The Mixer) is a recurring Reward Challenge. The game is similar to Memory, in that it requires memory, but introduces the additional element of information management in interactions with the opposite tribe.

Everyone is given a box with a certain number of items. One at a time, each castaway will ask someone on either tribe for a certain item. If the person asked has the item, they score a point for their tribe. The tribe with most matches win. In All-Stars, once someone's box is empty, that person is out of the game.

The challenge debuted in Survivor: The Amazon as a Reward Challenge for various toiletries. Every box had 5 items (35 pairs) meaning the tribe that reaches 18 wins. JoAnna Ward started things off by asking Dave Johnson for a pumice stone, which he didn't have. Daniel Lue scored the first point when he asked Shawna Mitchell for soap. Tambaqui had an initial lead over Jaburu. Jaburu gradually was able to catch up and eventually surpass Tambaqui when Daniel asked Heidi Strobel for conditioner, which Rob Cesternino had already asked for. With the score of 14 (Tambaqui) to 17 (Jaburu), Dave asked Christy Smith for shampoo. She didn't have it, allowing Jeanne Hebert to score the winning point for Jaburu. The final score was 18-14.

The challenge was reused in Survivor: All-Stars for reward. This time, the boxes had four items in them. Susan Hawk and Big Tom Buchanan sat out for Chapera, while Colby Donaldson sat out for Mogo Mogo. Boston Rob Mariano was first and asked Ethan Zohn for a rock. When he did not have one, Richard Hatch scored the first point of the game by asking Boston Rob for the same thing. Surprisingly, many subsequent guesses scoring points on the first try, leaving Jeff Probst amazed. Kathy Vavrick-O'Brien said that "No food makes you psychic" while Ethan told Jeff to make the boxes thicker. This ended when Lex van den Berghe guessed wrong about Jenna Lewis having a feather, which Alicia Calaway used to her benefit. Eventually, Alicia won the game when acquiring Jerri Manthey's seed, winning the final piece of the map to a hidden rice deposit and a bathroom for Chapera. Saboga placed second, receiving a piece of a map to a rice deposit. The final score was 9-8-5.

The castaways competing in The Amazon.

Alex in the challenge (The Amazon).

Jaburu wins the challenge (The Amazon).

The challenge in All-Stars.

Kathy and Ethan competing. Ethan tells Jenna L. that she might as well leave her box wide open. 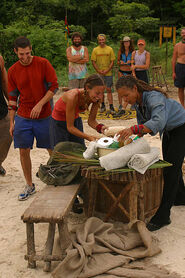 Chapera wins the challenge.
Add a photo to this gallery

Retrieved from "https://survivor.fandom.com/wiki/Matchmaker?oldid=557882"
Community content is available under CC-BY-SA unless otherwise noted.