Survivor Wiki
Register
Don't have an account?
Sign In
Advertisement
in: Tribes, One World Tribes, Starting Tribes,
and 5 more

Merged with Salani on Night 17

Manono​ is a tribe from Survivor: One World. Their tribe color is orange.

Despite having much dysfunction within the group of men, they enjoyed early success in challenges and showed no mercy when it came to who deserved immunity. They are also the first tribe to knowingly sacrifice tribal immunity without reaping any sort of luxury.

Manono's shot in the intro.

Manono at their first Tribal Council. 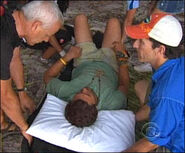 Manono at a Joint Tribal Council with Salani.